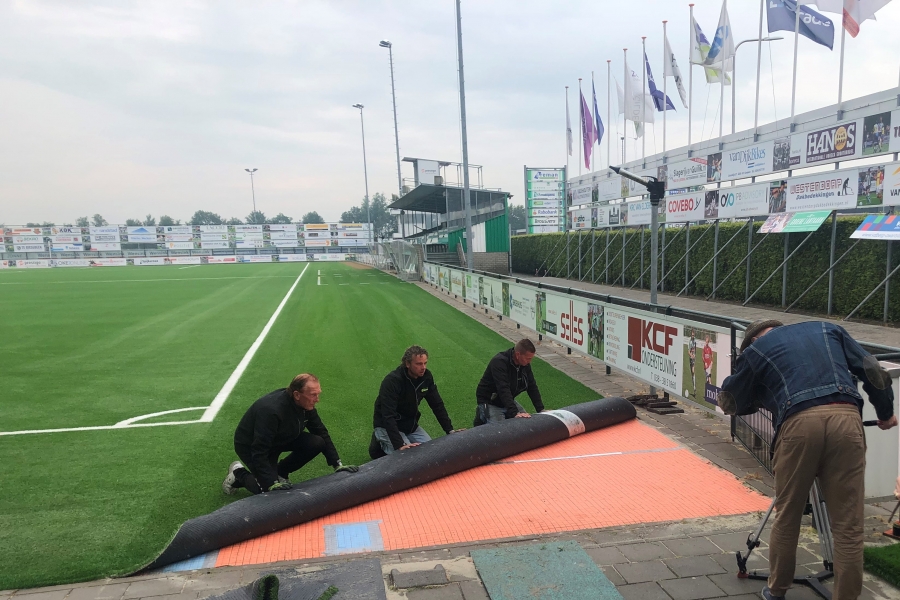 The soccer field is located in Genemuiden, Netherlands and is used by the Soccer Club Genemuiden, which plays in the nation’s highest amateur league. The artificial turf system was installed in 2009, and after a decade of rugged use, the club very much wanted to receive a field again, that could meet the outstanding quality of the old one. The club wanted a new field incorporating the latest developments and technology in artificial grass soccer systems.

Edel Grass, the artificial turf producer from Genemuiden that installed the original pitch, was hired to conduct the rehab project. The first step of the work was to remove the old artificial turf carpet, including the infill. As expected, the Alveosport shock pad underneath appeared in good condition for subsequent use. This was confirmed by testing the shockpad by the external laboratory KIWA. The measured values show that the ten-year-old Alveosport NUT 3001 12 mm foam and all critical performance characteristics remained intact. This was no surprise, since Sekisui Alveo declares that Alveosport has a lifespan two lifetimes of artificial turf carpet and gives a 25-year warranty on the product.

Ready for covering in less than a day

After the accredited testing institute had confirmed that the Alveosport shock pad will outperform another 10-15 years, the old shock pad was prepared for reuse. When the artificial grass carpet and infill was being professionally removed by machinery, only some small areas of the shock pad were damaged and this was quickly and easily repaired.

Edel Grass calls the new taylor made soccer system they installed ‘Edel Future Next.’ Using a combination of specially developed yarns and infill materials, it offers outstanding technical performance and meets today’s strict environmental regulations. The reuse of the Alveosport shock pad – which is 100% recyclable – enhances the environmental profile of the overall system even further. Alveosport releases no harmful chemicals or gases known to pollute soil water or air.

Reuse of the old shock pad also expedited the project, saving the owners both time and money. Mark van Spriel, Edel Grass project manager in charge of the Genemuiden project, says that reuse of the shock pad made the project much easier, cheaper and faster.

Quality is the key

Reuse and longevity of the shock pad is the key to the outstanding lifecycle cost/benefit ratio of Alveosport. The secret of the material’s longevity and stable performance properties is the quality of the installed materials, manufacturing, and design. Alveosport is made of cross-linked closed cell polyolefin foam. Use of virgin base materials ensures that the technical properties of the material can be precisely controlled. The patented product is designed specifically for use as a shock pad in artificial turf systems. The established quality system in the factory ensures the constant high quality of the product.

The new field in Genemuiden, built with recyclable and reused materials, is now in use, and the players and owners are delighted with the performance. Shock absorption, energy restitution and ball rebound are excellent; performance is uniform over the entire field. The infill and water-retaining thatch yarn moderate the field temperature on hot days, keeping the field as cool as possible when irrigated. Alveosport does not freeze because it does not absorb water, so the pitch can be used all year around. The new pitch is FIFA certified. It will reliably serve SC Genemuiden as a first-rate soccer field with natural performance for more than another ten years.