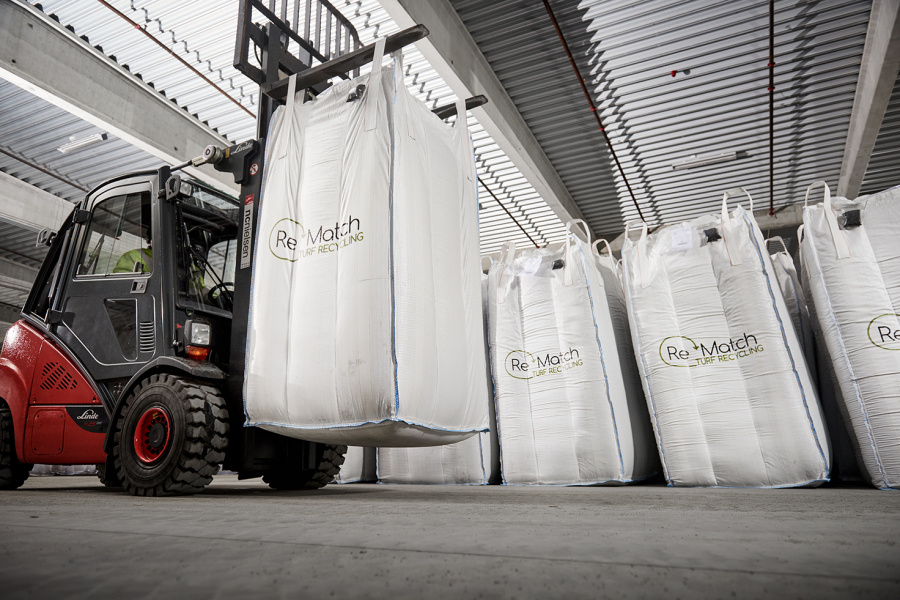 The new state-of-the-art synthetic turf recycling facility of Re-Match Netherlands is being built in Tiel in Gelderland and will create jobs for 35 full-time employees. Once the cleantech facility is fully operational, it will provide the capacity to recycle more than 2 million square meters of synthetic turf pitches per year (280 full pitches) from the Netherlands and Belgium. In plastic fibre alone, this saves the environment from pollution equivalent to 400 million plastic bags – every year.

Solving the real problem with a validated process
Re-Match’s patented recycling process shreds, cleans and separates worn-out artificial grass and infill without adding neither water nor chemicals in the process which provides sand, rubber, backing and plastic fibre as clean and separated end products. While some waste handlers can separate the sand from the rubber, this is not what represents the real environmental challenge of end-of-life artificial turf – it is instead the rubber and plastic fibres that are the main CO2 contributors. Separating out these materials is where the real benefit can be found as just one artificial football pitch contains an amount of plastic fibre equivalent to 1,4 mill. plastic bags. So basically, Re-Match starts where other processes stop, as the company offers the only solution where more than just one end product can replace virgin materials in new production cycles.

This environmental impact has been validated by the EU and Re-Match is the only turf recycler to have received an ETV verification*. In addition, the Re-Match process is also ISO 9001 certified – thereby ensuring customers that the process contributes real recycling.

No nitrogen emissions
With the introduction of the zero nitrogen emission requirements, the new plant had to meet standards that no company had to meet before. “This was a huge challenge”, says COO, Dr. Stefaan Florquin. ”But that’s what we do at Re-Match. We push the boundaries of environmental technologies while contributing to maximum reduction of nitrogen and the minimum use of fossil fuels. The last step towards becoming a local artificial turf recycler in the Netherlands is now successfully completed with the approval of the environmental permit”.

Dutch factory as a blueprint for expansion
The factory in Tiel will be a state-of-the-art, digitized facility that will serve as a blueprint for many new recycling plants that Re-Match will build in Europe and North America. The factory in Tiel will be followed by factories in France, the UK and in the United States. “We are proud to announce the construction of the factory in Tiel”, says CEO Nikolaj Magne Larsen. “It is an important milestone for the company and for our employees who have worked hard to achieve this goal – and we look forward to offering the most comprehensive recycling option in the Netherlands”.

EU grant to help close the cycle
While sand and rubber from the recycling process is used as infill in new fields, the synthetic fibre has so far gone towards production of products such as picnic tables, support panels and parking posts. With a grant of 2,5 million euros from the EU Green Deal, Re-Match and its project partners are developing a process for the production of new yarns from recycled turf. There yarns can then be used for the production of new synthetic pitches, thus closing the cycle. “It is our mission to ensure full circularity of synthetic turf – and to us, this means that the plastic fibre is also used for production of new turf pitches,” says Nikolaj Magne Larsen.

Tiel welcomes Re-Match
“The municipality of Tiel welcomes this innovative frontrunner in synthetic turf recycling. Tiel wants to attract future-oriented companies that offer added value for our residents and our local and regional economy. Companies that provide the jobs of the future for our residents”, says wethouder Ben Brink of the municipality of Tiel. “With their advanced factory, Re-Match offers a good solution for a growing environmental and virgin materials problem. Re-Match has chosen Tiel because of its excellent connections with the rest of the country. That and the presence of a growing number of cooperating and sustainable companies, makes Tiel an extremely suitable location”.

Ideal geographic location
The new facility of Re-Match Netherlands, which currently has an office in Rijen, will be located at Panovenweg in the industrial region Kellen in Tiel. This is not only in the centre of the country, but also close to highway A15/A2, the Amsterdam Rhine Canal and only 45 kilometres from Germany, which also makes the location as efficient as possible in terms of transport.

The site where the factory will be built, covers 31.800 m2 and the factory itself will be 8.769 m2. It will reach a height of 20 meters due to a separation tower that will carry out the final part of the recycling process, resulting in clean end products – ready to replace virgin materials in new production cycles.

A responsible choice
At Sportbedrijf Rotterdam, a leading sports facility company, they look forward to continuing the good cooperation with Re-Match: “We are happy with this new cleantech facility. If you want to make a responsible choice for recycling artificial turf, Re-Match is a very good option. They are able to separate components for 99,5% in order to replace virgin material. And there are many reasons more that justifies choosing Re-Match.”

During the new construction phase, Re-Match Netherlands will continue to collect worn-out synthetic turf pitches. These will be recycled in the new factory as soon as production starts in Tiel.

“The Netherlands is the country with the highest square meters of artificial turf per inhabitant in the world,” says Nikolaj Magne Larsen. “And we are delighted to now be able to offer the Netherlands a truly sustainable recycling solution for its end-of-life turf”.