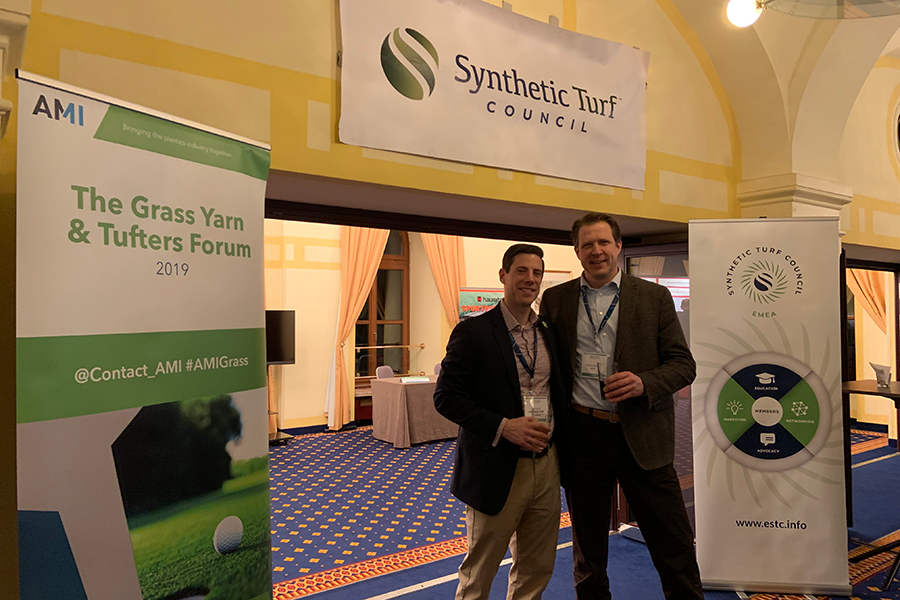 The European Synthetic Turf Organisation (ESTO) has changed its name to the EMEA Synthetic Turf Council (ESTC). On Monday night, ESTC Director General Stefan Diderich revealed the new name and logo at a networking cocktail reception that marked the start of AMI’s Grass Yarn and Tufters Forum  in Vienna, Austria.

Diderich was assisted by Dan Bond, President of the Synthetic Turf Council (STC).

Stefan Diderich said, ‘Our new name and logo reflect our revitalised ambitions to align our organisation with the international scope of the synthetic turf industry and particularly the industry in Europe, the Middle-East and Africa.’

Market analysts predict that the international synthetic turf industry will be worth US$ 1.7 billion this year.

‘The growing popularity of synthetic turf also comes with a growing responsibility. The ESTC board recognised last year that it would serve the needs of both the market and the industry when we take matters to another level,’ Diderich explained.

The four focus areas identified by the ESTC include the facilitation of networking within the industry; the provision of information to members and the industry at large; supporting its members; and promoting the industry.

‘The upcoming ESTC conference in Edinburgh, Scotland, will be the first opportunity for the industry to experience the new ESTC. Confirmed speakers include representatives from FIFA, FIH, World Rugby and both the Scottish and Dutch FAs. They will present papers on the connection between synthetic turf and their respective sports. We will also discuss the recycling of synthetic turf systems and the latest developments to reduce the environmental footprint of synthetic turf, amongst several other topics currently dominating the industry,’ he concludes. The ESTC conference will take place from 1 to 3 April in Edinburgh, Scotland.