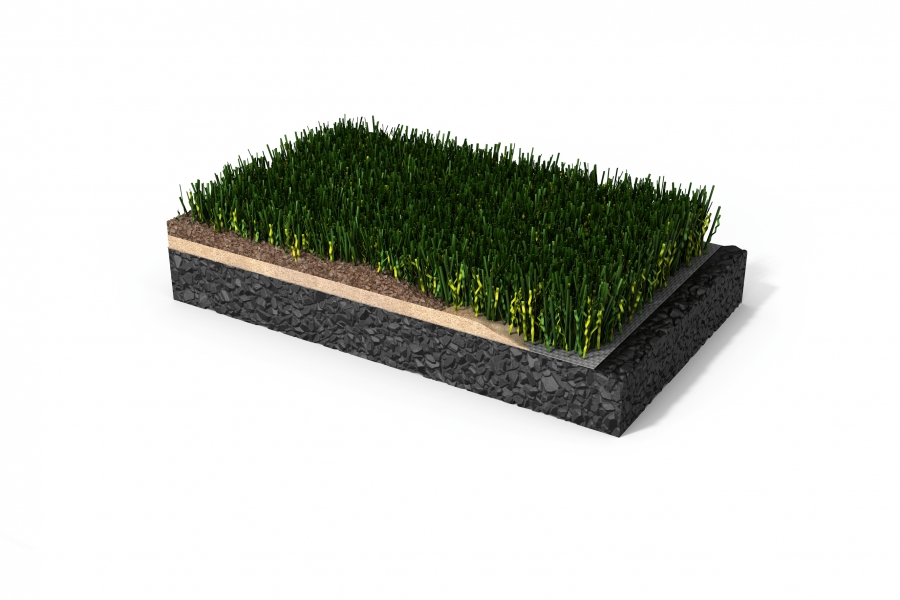 The LigaTurf Cross football turf has become an absolute model of success since it was launched on the market. The high demand it enjoys can be attributed to the special combination of smooth and textured synthetic turf fibres in one system. Not only does this give the sports surface natural playing properties, it is also robust and easy to maintain. For FSB 2019 in Cologne, Polytan has taken the turf another logical step further, adding the component of sustainability. The fibres of the new LigaTurf Cross GT consist to 80% of bio-based PE plastic. That, along with additional in-process measures, have made it the first CO2-neutral synthetic football turf in the world.

The bio-based plastic used for the new LigaTurf Cross GT is called I’m greenTM polyethylene and is manufactured by the Brazilian world market leader, Braskem. It is extracted from sugar cane, a renewable raw material, far from the Amazon region. Another decisive environmental aspect for Polytan is that the sugar cane is cultivated first and foremost for the production of food: only the third pressing, which can no longer be used for table sugar, is used to manufacture the bioplastic.

Polytan is currently producing the fibres for the LigaTurf Cross GT synthetic turf from I’m greenTM polyethylene – accounting for a share of up to 80%. That ensures the optimum environmental balance, because this bio-based raw material allows more than 2 metric tons of CO2 to be saved for every ton of material that is used for the fibre filaments. Over a complete football pitch, this adds up to about 56 tons of CO2. This is the basis for the CO2 neutrality of the new LigaTurf Cross CT. It is ultimately achieved thanks to a whole raft of measures introduced by Polytan, including switching the entire production in Gefrath over to 100% green electricity and optimising the manufacture of the back coating of the synthetic turf.

This CO2-neutral eco-balance of the LigaTurf Cross GT enhances the attractiveness of the synthetic turf for clubs and local authorities still further, because in addition to the high player comfort delivered by the smooth filaments and the extremely hard-wearing and easy-to-maintain properties of the textured filaments, it also meets high environmental standards. And as if that were not enough, the special combination of fibres allows the quantity of infill crumb to be reduced by another 40 per cent or so to less than 2 kg/m². What is more, the higher stitch density ensures better retention of the crumb in the surface, optimises player protection and reduces the unwanted splash effect.

Friedemann Söll, Polytan Chief Product Officer Region EMEA, on the innovation presented in Cologne: “LigaTurf Cross GT, the world’s first CO2-neutral football turf, is already the fourth product in the Green Technology range we launched in 2017. All GT product innovations are characterised by an improved eco-balance in the manufacturing process and can be easily recycled at a later stage.” The bio-based I’m greenTM polyethylene from Braskem has already proven its worth in the Poligras Tokyo GT hockey turf, the fibres of which are likewise made from this raw material. The hockey surface was developed with an eye on the 2020 Olympic Games in Tokyo, where it supports the aim of being the first CO2-neutral Olympic Games.