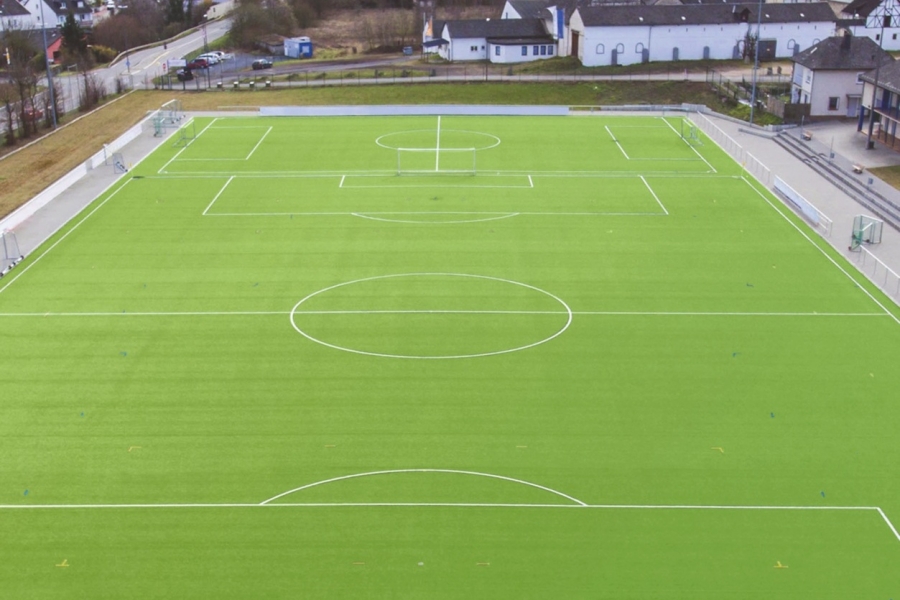 Constant product innovations in our own research and development laboratories make it possible for the new generation of LigaGrass Synergy synthetic turf from Polytan to need a further 50 per cent fewer infill granules than its LigaGrass Pro CoolPlus predecessor – which already had a reduced amount of infill – without having to compromise on the highest standards of injury protection for players and the playing qualities of the turf. The Burgheim-based sports surface specialist has been able to reduce the amount of infill required in its synthetic turf systems to approx. 2 kg/m², depending on the respective system design and type of rubber granulate. This is 80 per cent less than the international infill requirement of around 16 kg/m².

The current debate on the discharge of rubber granules from synthetic turf playing fields into the environment means that sports clubs, local authorities and communities are increasingly faced with concerned questions from their members, management boards, sponsors, athletes and parents. As one of the world’s leading manufacturers of synthetic turf, Polytan can give the all-clear here – at least with regard to its own synthetic turf systems, which currently represent state-of-the-art technology for synthetic turf pitches in Germany.

Synthetic turf playing fields in Germany differ significantly from the European EN 15330-1 standard in terms of their construction: the German DIN 18035-7 industrial standard stipulates the use of a stable, elastic base layer. The turf laid on top of this has substantially shorter filaments and requires a lower amount of rubber granulate infill at the same time. At Polytan the latter consists of recycled materials, is between 25 and 30 cm thick and has optimal levels of force reduction to protect athletes against injury. It has a minimum lifespan of 30 years.

The use of textured filaments, or stalks with a “permanent wave” as it were, is another way of making sure that less infill material is needed and has been standard practice at Polytan since the early 2000s. Not only are the textured synthetic turf filaments more hardwearing than smooth ones, they also reduce the amount of infill and splash of Polytan synthetic turf systems even further.

All of these attributes come together in the new LigaGrass Synergy. In addition, it has been possible to lower the infill requirement of this new synthetic turf system by 50 per cent within the textured turf, thanks to a higher fibre content and an even denser turf structure.

With the newly developed MultiTuft technology, Polytan has for the first time succeeded in combining two textured filaments of different shapes and fineness to form an optimal complete system. A multitude of soft and flexible Synergy filaments are combined with the larger and firmer LigaGrass Pro filaments in this process. As a result, the infill is held more firmly in place in the turf without having to compromise on traction and rotation.

Apart from the use of a durable elastic layer and textured filaments, the Fusion GT granules also help to reduce the infill requirements of the new LigaGrass Synergy synthetic turf system from Polytan. This new EPDM rubber granulate product is a combination of natural and fast-growing renewable raw materials and was brought to market by Polytan in 2017. The almost natural shape of the granules reduces the bulk density of the material – and hence the material requirements – at the same time.

LigaGrass Synergy – making clubs and communities fit for the future

The high wear resistance, low maintenance costs and natural grass appearance of LigaGrass Pro synthetic turf make it the ideal system for clubs and communal facilities. Its successor, LigaGrass Synergy, has an even lower infill requirement of just 2 kg/m², making it fit for the future from an ecological perspective as well while also guaranteeing the same level of player protection and comfort.

And for those who would prefer it, there is always the option of doing without any synthetic fillers: the new LigaGrass Synergy is also available from Polytan as a purely sand-filled version.