ESTC conference speakers conclude: STexit is not an option 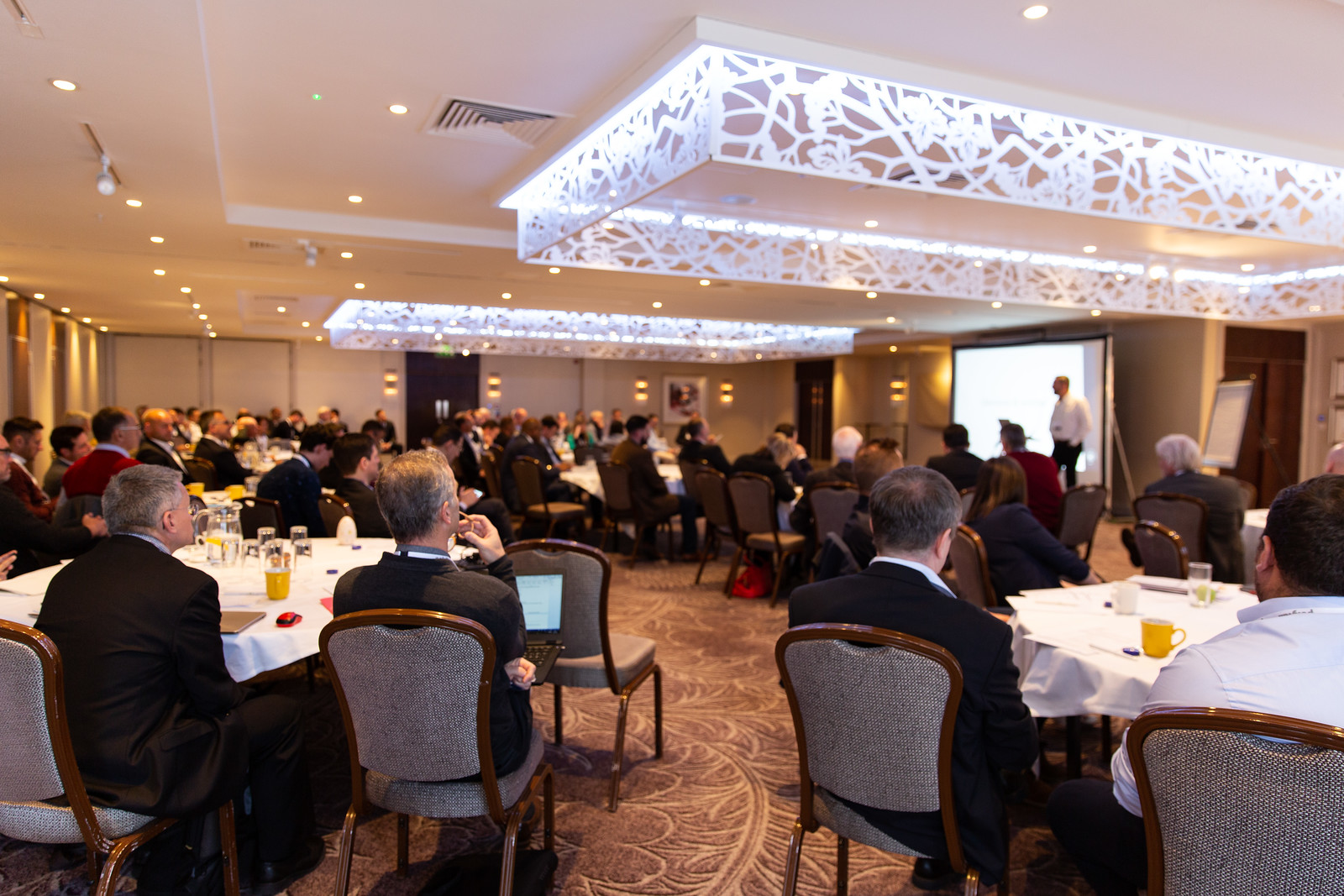 While much of the ESTC conference focused on the threat for 3G sports fields, statements made by various speakers made it clear that the positive contribution synthetic turf has made carries a value and weight that exceed the wildest expectations.

The conference in Scotland attracted more delegates than witnessed at previous events. The increase in delegates can partly be attributed to the drive to sign up new members. Recently companies and organisations like Mattex Yarns, Royal Grass, GreenFields, Amorim Cork, Italgreen, SignGrass, FIFA, TWD Fibres, ETRA, CIRFS, Sports Labs and Beens Grass Yarns joined the ESTC. Growth is important as the more members the ESTC has, the easier it will be to claim a seat at the table where political decisions about sports flooring are being taken.

The importance of being represented at the highest level became evident immediately. Unless the industry states its case, use of plastic or rubber infill might become prohibited from 2021 as the European Chemical Agency (ECHA) is working on a new REACH restriction on the use of intentionally-added micro plastics that are less than 5mm in size and which are made from non-biodegradable polymer. Despite micro plastic pollution from 3G synthetic turf fields being very limited, the ECHA currently sees no reason to exempt infill material from their proposed ruling. While the ESTC does not dispute or disagree with the intended purpose of the ruling, the proposed limited time-frames and rigid approach will cause major problems for both the industry and the market. The ESTC believes buyers and producers should be granted the opportunity to understand the implications, stimulate the use of mitigating measures and allow alternative solutions to become main-stream. The ESTC has identified the issue as being the number 1 priority.

From the debate it became evident that currently there is no information on how much infill a 3G sheds per annum. One delegate referred to a Dutch study that concluded loss of approximately 300 kg of infill per annum. Approximately 80 – 90% of this can be prevented by introducing or adopting mitigating measures. ESTC Technical Advisor Alastair Cox called for the sharing of information with the ESTC. As ECHA has asked the industry to respond on the proposed restriction or ban by mid-July latest, the time in which to respond is limited. Both members and non-members can support the council in building a case by sending case studies, research and substantiated proof of the positive contribution synthetic turf makes to info@estc.info. 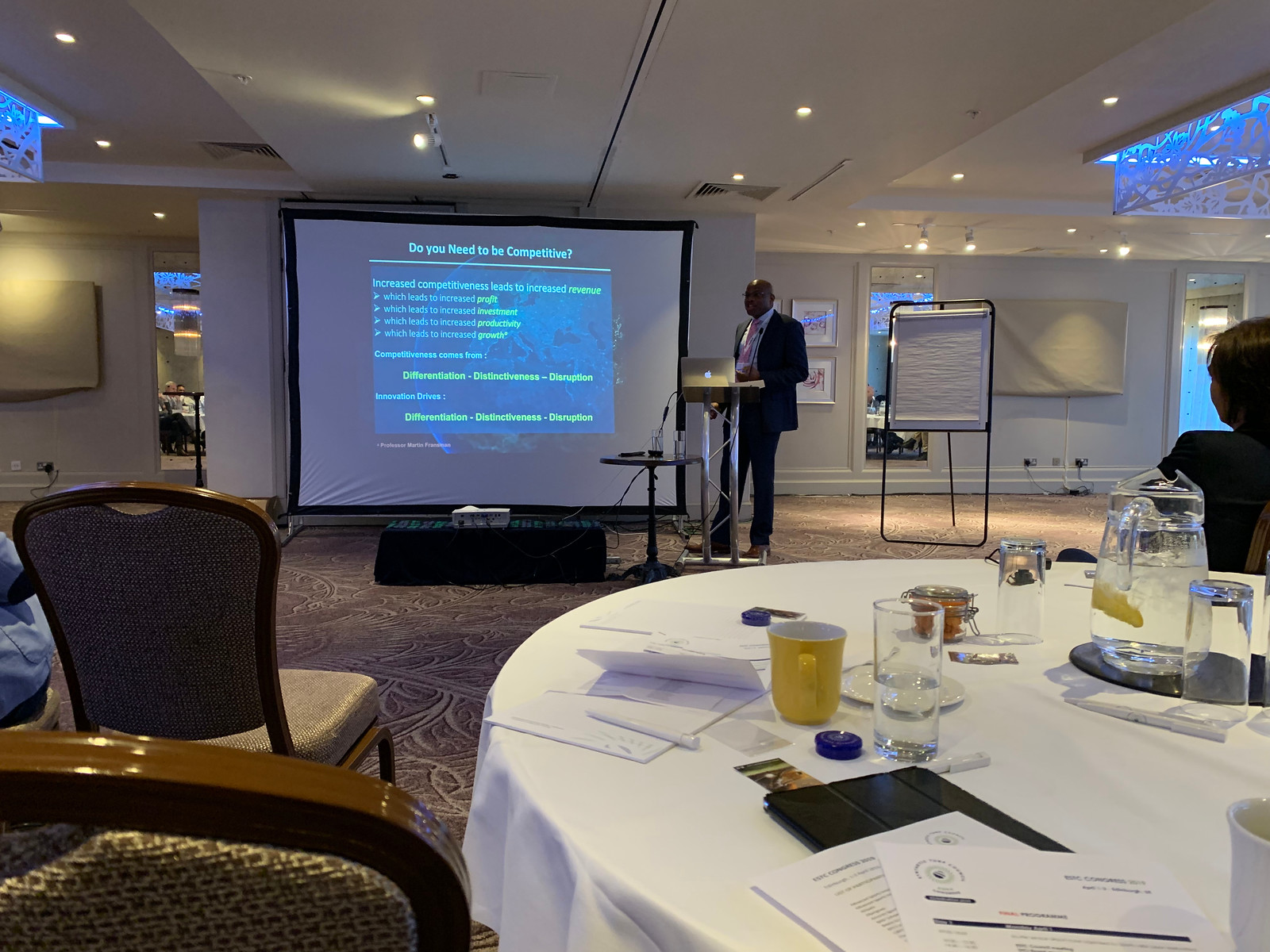 Over 700 million player hours per annum

Quantifying the positive gains from synthetic turf can be a challenging requirement for companies and it can be taken to a higher level. As one representative of the football fraternity pointed out “the industry needs to confirm that they are innovating”. According to George Oriahi of Scottish Enterprise this has no restrictions. “Innovation doesn’t require you to wear a lab coat.” Colin Young of TenCate Grass proved that this is the case as he wore anything but when explaining the drivers and challenges their non-filled system experiences.  Although he did not shy away from admitting that synthetic turf systems without infill can certainly do with an improvement, he also advocated that the current norms are not conducive to this type of system. “The methodology and design of these test methods do not always translate well to non-filled systems.”

Another innovation that was discussed was Re-Match’s ability to repurpose plastic into new yarns. The company recently announced its intention to build 23 factories across the world in the coming years to provide a solution for the growing number of end-of-life turf carpets. Re-Match is best known for dismantling synthetic turf in a safe and sustainable way. However, Dennis Andersen revealed that the company has used extracted PE from of end-of-life turf to produce a new yarn. The ambition is to install the carpet at 10 playgrounds later this year in a test to determine the durability of the yarn.

Presentations delivered by representatives of various sports federations made it clear that synthetic turf, and 3G turf in particular, still offer enough opportunity for further studies and improvement. Alastair Cox, who also works for FIH, pointed out that the international hockey federation is busy developing new test procedures and set requirements to assess synthetic turf for hockey. He also encouraged the industry to take a holistic approach to the development of new turf systems. A change the FIH prefers to see is that masterbatch and yarn manufacturers, together with the tufting companies, engage hockey stick, shoe and ball manufacturers, as well as elite players and high-performance coaches, in the development of new surfaces. As the FIH believes that water-usage of a  water-based pitch is excessive, they encourage the industry to consider new solutions that would make water for hockey surfaces obsolete. 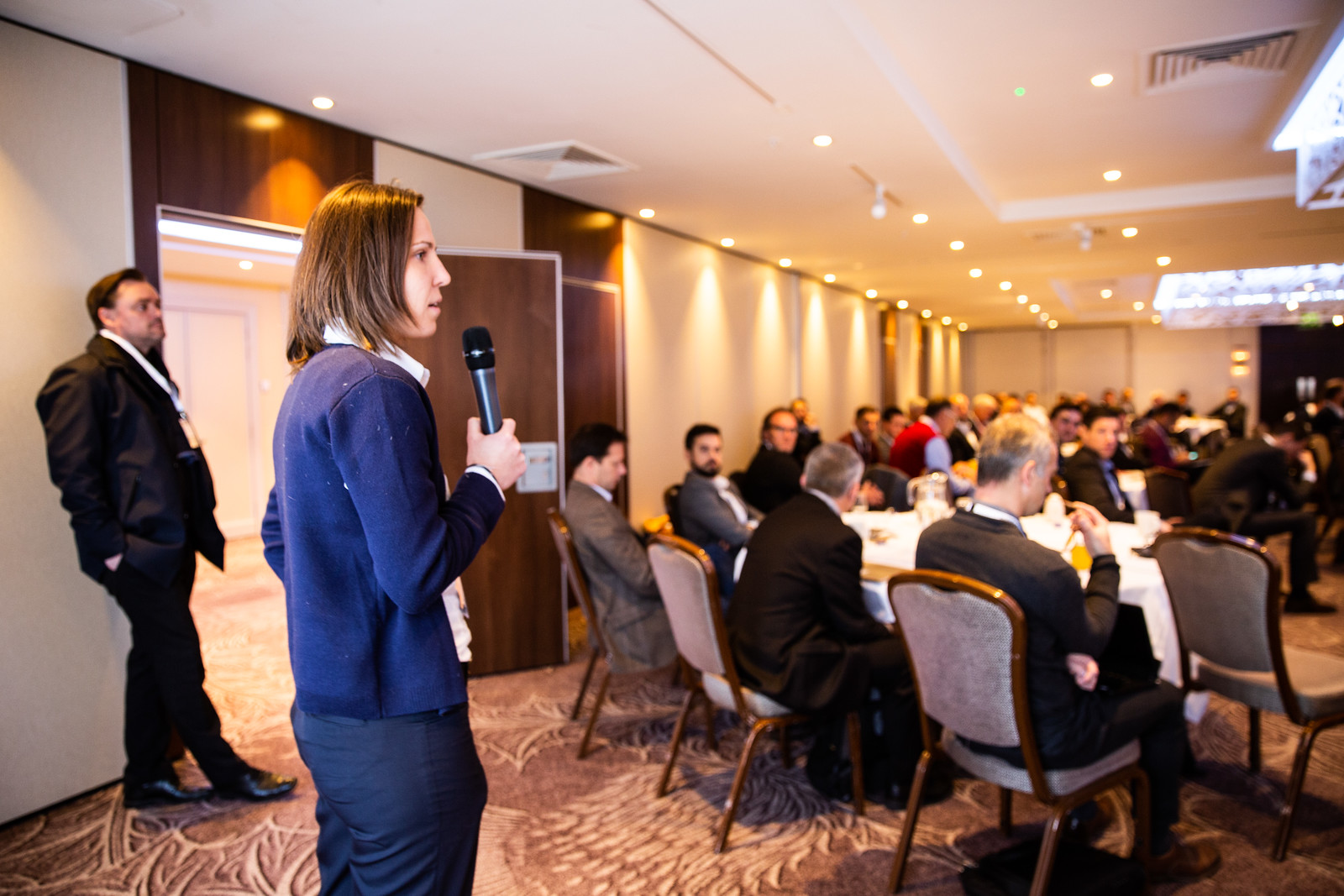 A presentation by Katharina Wistel made it clear that FIFA dedicates much time to improving testing methods and procedures. One that will safeguard the synthetic turf industry itself is the validation of a rinsing method to wash off additionally added spin oil. It appears that washing samples has become inevitable as the excess spin-oil influenced the results from the compulsory skin friction test. Other focuses of the various FIFA Working Groups she discussed included the new research proposal that the testing institute Sports Labs submitted to better determine yarn wear. Once approved rotating plates will be used to predict how synthetic turf carpets will wear over time. They also consider the impact of different materials and shapes made to resemble studs of modern football shoes. FIFA is also considering new protocols to test line markings and want to review the performance criteria of a synthetic turf field.

FIFA has also joined hands with World Rugby to come to a more accurate assessment of the possible threat a surface poses. The ins and outs of the study were discussed by Dee Keating of World Rugby. She took the delegates through the 5 stages of a 3-year study that World Rugby and FIFA will conduct together with Cardiff University and Sports Labs to come up with new testing methods as well as a replacement for the Securisport, the device currently used. The new device should more accurately replicate players sliding on the surface. The ability to better replicate player’ behaviour and experience should certainly help to improve synthetic turf even further.

Philipe Aldahir of Shaw Industries advocated the same. Over the past few years the flooring company from the U.S. has built an extensive database that now helps the company quantifying the playability of synthetic turf. Their assessment tool considers various criteria including G-Max, HIC, force reduction, vertical deformation, energy restitution, hear vane and rotational traction. Instead of using all criteria to determine the playability of a field, Shaw Industries only selects those criteria that matter to the sports or the location.

The ESTC sponsors made a big difference. Polytan, Juta Grass and Sports Labs made sure that delegates had ample time to network during the day as well as during the networking evening in downtown Edinburgh. Sports Labs used the opportunity to submit delegates to a small quiz to remind everybody about all the other good things Scotland has to offer. A visit to their offices, the next morning, convinced even the biggest sceptic that Sports Labs is one of the best export products Scotland has to offer.

Let there be no doubt: the ESTC represents the synthetic turf industry for both sports and landscaping. However, being such a hot topic the micro plastic issue required extra attention this event. Concerns raised have been noted and the situation will certainly be different by the time of the next gathering, later this year. ESTC members will be welcomed again in November during the FSB Show in Cologne, Germany. The show will run 5 – 8 November at the Exhibition and Convention Centre in Cologne. FSB stands for Leisure (Freiraum), Sport and Exercise (Bewegung) equipment. There is no doubt that the landscaping market will be well-represented in Cologne in November, be it at the FSB or at the ESTC event. 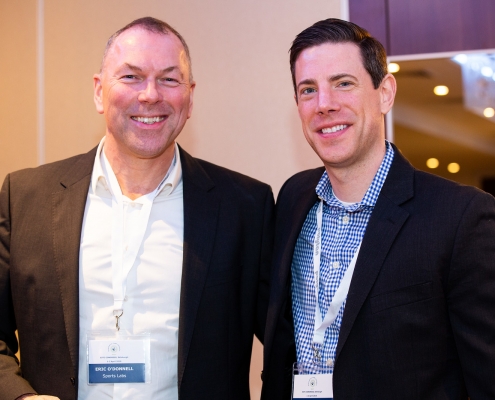 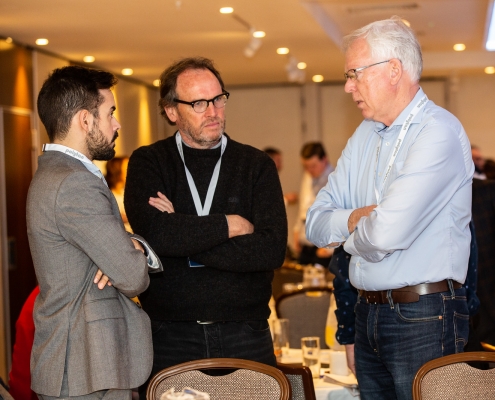 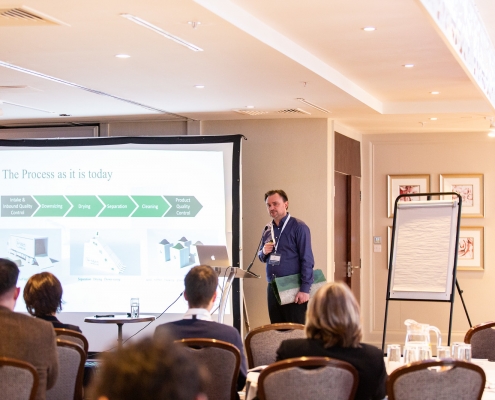 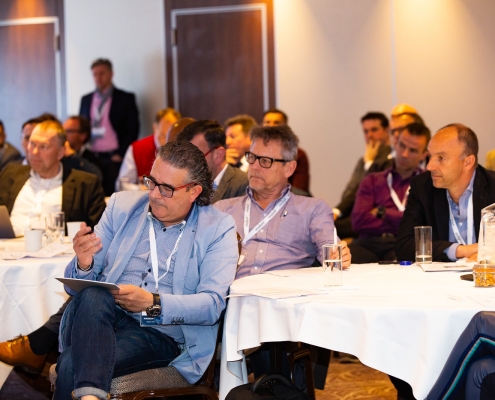 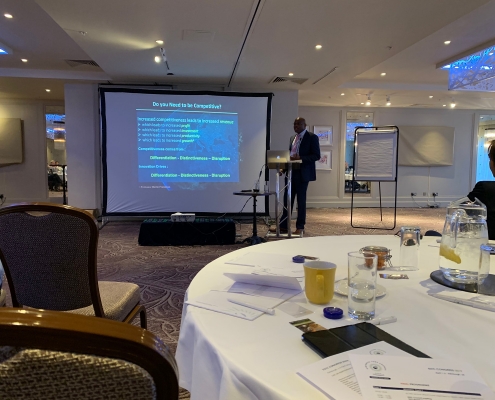