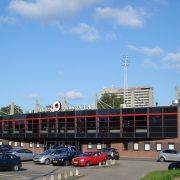 Van Donge & De Roo Stadium (former name until May 2017: Stadion Woudestein) is a football stadium in Rotterdam, located in the Kralingen district. The stadium, which is home to the Eredivisie side Excelsior Rotterdam, is one of the smallest professional football stadiums in the Netherlands with 4,400 places. Since 2010 it is also one of the few to use synthetic turf pitch.

The history of Woudestein starts at the same time as the foundation of Excelsior in 1902. The club, which at first only consisted of a group of young people from the Kralingen neighborhood, played its first matches on a site at the Woudesteyn estate. In 1907, the football players had to clear the field after a decision by the municipality of Rotterdam to rent out the land on which the stadium was located to a manager of a racing stable, who wanted to organize horse races here. The racecourse was not a success, and for 50 guilders a year Excelsior was allowed to play their matches at Woudestein again. The bad state of the field turned out to be problematic when the club promoted to the ‘Overgangsklasse’ in 1921. The NVB approved the site, and again they had to look for a new home. After having played alternately on the fields of Sparta Rotterdam, Feyenoord, CVV and VOC, Excelsior was able to go to the new Kralingen Sports Field on the Toepad from August 1922 onwards. However, this sport park did not have a long life: at the end of the 1930s the site was designated for the construction of a marine barracks.

The club returned to Woudestein, which after a thorough renovation – where a tribune and a dressing room transferred from the Toepad – could be used again. During the Second World War it was not possible to play in the stadium because it was occupied by anti-aircraft guns. During the hunger winter, the complex had to be guarded to prevent people from using the stands as firewood.

The capacity of 8,000 places turned out not to be enough in the successful period after the Second World War, and the club had to regularly move to Stadion Feijenoord. Through some expansions, the capacity was increased to 11,000, with the possibility to build emergency stands. The next major renovation took place in 1958, when the first covered standing stand in the Netherlands was built with the help of supporters on the north side. The construction was taken into use on 14 September of that year. Excelsior still played in the second division at that time, but after two consecutive promotions in 1970 he was the division leader, which had positive consequences for the number of spectators. On October 7, 1973, a new Elascon seating stand was opened, which gave place to 2000 supporters. It would become the last major adjustment for a long period. The club is jojode a lot between the different divisions, and was regularly in financial trouble. In order to pay Woudestein players and maintenance, supporters gathered old paper for years, which earned Excelsior the nickname former paper club.

By the 1990s, it had become severely outdated though, and the club looked into sharing a ground with Sparta Rotterdam. These plans fell through though, and instead they decided to renovate Woudestein. Two new stands were built, including a new main stand with business seats, resulting in a capacity of 3,500 seats. Stadion Woudestein officially reopened on 31 July 2000 with a friendly match against Feyenoord.

in 2010, one of the stands was named after Robin van Persie, who played in the club’s youth academy. The same year saw a synthetic turf pitch having been installed. In the same year the club also switched to an artificial pitch. In 2016, following Excelsior’s promotion to the Eredivisie and their first two successful seasons in the top flight, the club decided to expand the stadium by filling two out of four corners and upgrade the hospitality facilities. This raised capacity to the current 4,400 seats. In 2017, Stadion Woudestein got renamed Van Donge & De Roo Stadion following a 10-year naming rights sponsorship deal.