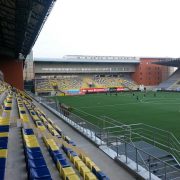 Stayen is a football stadium in the Belgian city of Sint-Truiden and the home stadium of football club Sint-Truidense VV. The stadium was built in 1927. The name Stayen is Sint-Truidense dialect for “Staden”, an old quarter of the city. From the fifties to May 2009 the name was written as Staaien. The stadium is nicknamed the Hell of Stayen, according to the defeats that top clubs regularly endure.

Sint-Truiden was founded in 1924, initially played on a site on the Tongerse Steenweg and later on the Montenakenweg. Thanks to Alfred Wauters, then director of sugar factory Mellaerts, a new site was built on the Tiensesteenweg, on grounds of the sugar factory. The first season on the new arena resulted in Sint-Truiden being promoted (for the first time) to the national division.

During the Second World War, on 24 August 1944, the stadium was destroyed in an air bombardment. In 1948/49 STVV played for the first time in the First Division (then the Second class). A covered grandstand was built, with 600 seats. In 1952/53 there were also pitches and showers were installed in the changing rooms. In the meantime, STVV reached the highest level in Belgian football for the first time in 1957/58. In the season 1965/66, the season that STVV became vice champion, a record number of over 20,000 spectators were present at Staaien for a match against Anderlecht.

In 1981/82, when STVV played in the Second Class, Staaien got new stadium lighting with light poles. In 1983 a new modern complex came on the site of the old canteen and stand stand. After a new promotion to the First Division in 1987, the stadium was further adapted and renewed. The main stand was rebuilt in the autumn of 1988. The capacity at that time was 16,000 places. In August 1989, Staaien also received a new turf, with mature grass that was imported from the Netherlands. In order to protect the pitch, reserve and youth teams from now on played their matches on a different field.

In 1990 a new stand was added and two years later two blocks with business seats were installed. In 2001, a new complex was set up behind the main stand, with various facilities such as a press room, a café and extra sanitary facilities. In 2003, the stadium was further modernized and a standing stand was replaced by a new seating stand with more than 5,000 seats.

In 2008, the Truidense club started to build a stand on the street side. This tribune includes a party room, a gym and some offices. There was also a hotel on the corner with the grandstand. The stand was completed in February 2009, after which a new main stand was started. This main stand should also be multifunctional. For example, space would be provided for offices on the corner of the two new stands. The cost of the two new stands amounted to 35 million euros. The new stadium was fully finished in May 2014 and seats 14,600 spectators, 3,530 of which are pitches. The number of spectators can be extended to 17,850 with inside seats and additional mobile standing stands (without refurbishment), of which 5,280 standing places.

At the home games of Sint-Truiden, an average of 9,000 supporters finished on average in the 2015/16 season.

For the 2011/12 season, Stayen was the first Belgian first class stadium to receive an artificial turf pitch.