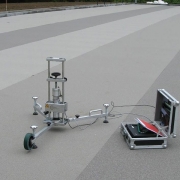 The ESTC is pleased to hear that the European Standards Committee (CEN) will continue to develop a European standard for shock pads despite a recent vote to officially place the drafting of the  European standard on the committee’s work programme, failing to get enough votes from the various European nations that are members of CEN.

‘Although there was a majority of votes to formally adopt the work item some of the larger countries in Europe didn’t vote in favour of the plan, meaning the weighted majority of the countries that voted in favour wasn’t enough to tip the balance,’ says ESTC Director General, Stefan Diderich. The disappointing result means that countries are still allowed to continue drafting and developing their own national standards on this topic. ‘We consider that a waste of resources as many of the shock pad producers trading in Europe have already adopted the ESTC Performance Guide for Shock pads as a means to determine the quality of a shock pad,’ says Frenk Stoop, the chairman of the ESTC Shock pad Working. The document is available on the ESTC website and could have provided the basis for a European standard.

While the European Standards Committee failed to formalise their work on Shock pads, authorities in North-America have embraced the concept. ‘With the help of the Synthetic Turf Council (STC) in North America, the document also received input and the blessing from the North-American synthetic turf industry. It is expected that a shock pad standard for North-America will be adopted this fall,’ the Technical Director of the ESTC, Alastair Cox, points out. Cox is confident  that the European Standards Committee, ultimately, will follow suit. ‘They have agreed to reconsider the proposal for placing the drafting of a shock pad standard on its works programme. Before they can do so, they will first have to review all objections that have been submitted,’ he explains. Many of these rejections had been considered in the previous process but have now been resubmitted. ‘This will be a time-consuming process we have to accept before we can move on and fully develop the standard.’ Cox estimates that it could take another couple of years before a European standard would become reality.

While the ESTC has been disappointed by the voting of the European Standards Committee, it certainly hasn’t lost its fighting spirit. ‘European and North American standards form the blueprint for regulation in many other countries and particularly in those that don’t have the knowledge or resources to draft their own independently. This small step towards better and safer sports surfaces in Europe and North America is the equivalent of a giant leap in countries where sports and the quality of sports infrastructure are considered less important than many other pertaining issues,’ says Stefan Diderich, the ESTC Director General. As the ESTC represents the synthetic turf industry from Europe, the Middle East and Africa, there are enough reasons to continue pushing CEN to develop such a standard.