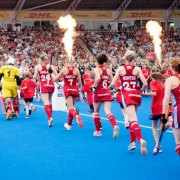 As the FIH Pro League double header between England and New Zealand deserved a venue that would do justice to the intentions of the games, the synthetic turf industry took on the challenge and delivered a quality, yet portable, surface. This enabled England Hockey to move the games to a bigger and even more high-profile venue.

The FIH Pro League is the successor of the FIH Champions Trophy and Hockey World League and is set to become the FIH’s drawcard to improve the profile of hockey and increase its global fanbase. Hockey is still the worlds’ third-largest team sport, after football and cricket, but lately it has been missing out on the commercial gains from high-profile tournaments like the football Champions League or commercial cricket leagues. Clever marketing strategies and a proven fanbase in hosting cities and nations have helped the respective sports federations to grow the profile of the game and their international fanbase. FIH’s Pro League has been developed and designed to achieve a similar change but successes will only become reality when hosting cities will play their part of the game. 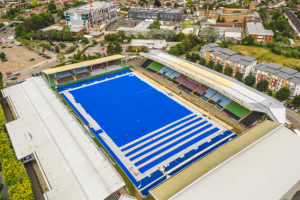 The moment it got clear that both the men’s and women’s team could play the respective teams from New Zealand on the same day, England Hockey embarked on a quest to find a venue that would have sufficient capacity to accommodate the crowd anticipated for these games. The rivalry between both powerhouses goes back a long way and the organisers were convinced they could sell significantly more tickets than the approximately 7,000 tickets they would be able to sell from playing at their normal home Lee Valley, the former Olympic venue. Apart from the capacity the venue was also expected to deliver the comfort and atmosphere normally associated with big sports events. After having consulted the Rugby Football Union, contact was made with management of Twickenham Stoop stadium, home ground to Harlequins Rugby Club. The choice certainly got the blessing from Jamie Hindhaugh, COO of BT Sport, the media partner of England Hockey. “We are big hockey fans at BT Sport and it’s fantastic to see the game continue to go from strength to strength. We are delighted that The Stoop will host a double header on FIH Pro League final day, it’s a venue that we know well which will help create a fantastic atmosphere and great TV.”

Nothing left to chance

FIH and England Hockey couldn’t have wished for a better partner than Harlequins Rugby Club. The reason why the club is one of the oldest and most-recognised rugby club in the world, is thanks to its drive to always wanting to innovate. “Our club has a history of innovation and adventure and we take great pride in being able to offer our neighbours and supporters the chance to see something different at The Stoop,” Harlequins CEO David Ellis said while explaining their eagerness to get involved in the project. Installation of the temporary hockey pitch could start early June, providing the venue would be handed back in time and in a condition the club would be able to prepare itself for the upcoming rugby season.

Installing a synthetic turf for a temporary hockey event is nothing new. In 1998 and in 2014 stadiums in Utrecht and The Hague, both in the Netherlands, had permanent synthetic turf hockey structures installed for the Hockey World Cups. What made the intentions from England Hockey different was that, this time, the field should be designed as a temporary structure that would not damage the existing field and that could be use again in the future. 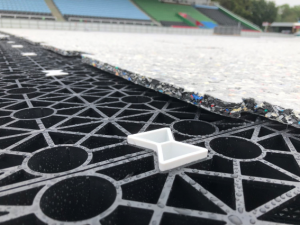 In close partnership with England Hockey, FIH Global Partner Polytan, shockpad supplier Schmitz Foam Products, sub-base and water management experts Polypipe, natural sports turf research and development institute STRI Group, Harlequins Rugby Club, England Hockey and the FIH, set off to design and establish the field. Small scale trial works had been carried out at STRI UK already and all parties involved had analysed the efficacy of the prototype. Pro hockey players had also been invited to play on the test pitch and had given it their blessing. Once it was established that the prototype could be upscaled, a further trial was established at Bisham Abbey which replicated the crown formation at Twickenham Stoop. “This helped us to determine the required performance parameters to meet the requirements of hockey without damaging the existing pitch,” STRI senior design consultant, James Westwood explained. “This involved modification of the existing crown formation over the pitch to provide the finer surface tolerances and gradients required for the game of hockey, as well as enhancing the existing drainage which would also benefit the Harlequins in the longer term.”

Establishing the groundworks took a bit more time this year. “We first removed the turf, levelled the ground and enhanced the drainage of the existing field so we could provide the platform on which the temporary hockey pitch is be installed,” FIH Facilities & Programme Manager Alastair Cox. Thanks to the preparations, any future installations of the hockey field would only require installing the field itself. The plan will be that Harlequins rugby club plays rugby one weekend, then a hockey pitch is built over the turf to allow hockey games being played the following weekend, before the temporary structure is taken out again to ensure the venue will be ready to host its usual rugby event the weekend after. “Our aim is to be in and out of a stadium in six to eight days during which we will install the pitch, play the match and remove the pitch again.” 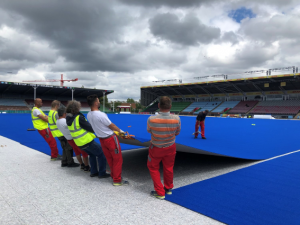 Games were played on a Poligras Tokyo GT surface, the same surface that will be used for the 2020 Tokyo Olympics

Once groundworks were finished, a unique Permavoid geocellular sub-base was installed to create a stable, high-quality playing surface that can be quickly and cost-effectively re-created on any scale, in any location and on any existing surface. Over 24,000 interconnected 85mm deep units were installed. Its open cell structure provides a temporary attenuation volume to receive any excess water from the surface. Eliminating the risk of any surface water ponding, while allowing it to infiltrate to ground at the sub-soil’s natural rate. The sub-base was topped with a high-density, ridgid ProPlay shockpad from Schmitz Foam Products to maintain the level integrity of the finished surface before it was completed with Poligras Tokyo GT. The FIH Global Supplier has specifically developed the new surface for the 2020 Tokyo Olympic Games. The yarn is made up for 60% from renewable resources. More importantly, this surface requires two-thirds less water than the surfaces used at previous Olympics.

The whole project truly delivered as planned. The two games were played to an almost capacity crowd of 15,000 spectators, granting many more fans the opportunity to attend the games. They also enjoyed the comfort of a venue specifically built to accommodate sports enthusiasts and to quickly and comfortably provide for all their needs. There is no doubt that gate fees and revenue generated from selling food, beverages and souvenirs ended being significantly higher that what used to be during previous hockey games. Sponsors and officials also enjoyed the luxury and comfort of the existing hospitality suites while, perhaps evenly important, media and broadcasters could immediately tap in existing infrastructure to broadcast the games. The success of the project was rounded off by the fact that both the English men’s team, as well as the women’s team, beat their opponent from New Zealand. The victories were important for both teams as they hadn’t really experienced much success in previous games. It can certainly be claimed that the support of some 15,000 fans made a difference. 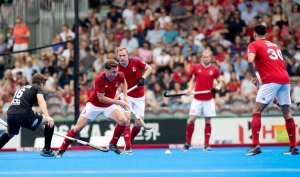 How much the organisers and hockey in general have gained from the event, will become clear in the coming months. Hopefully its success will translate in more sponsors, more players and, above all; more fans. Thanks to the agreement between England Hockey and Twickenham Stoop stadium management, there will be many opportunities and sufficient capacity to cheer on their team. “England Hockey’s plans to host matches at Twickenham Stoop demonstrates the innovative and ambitious thinking our National Associations are investing in the new FIH Pro League,” FIH CEO, Thierry Weil, said when England Hockey unveiled its plans to use a different venue. Without a doubt, ambitious thinking can always count on the synthetic turf industry to deliver.