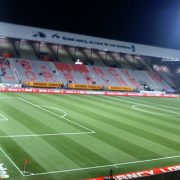 The Stade Marcel Picot is a stadium located in Tomblaine, France, on the banks of the river Meurthe, about 2 kilometres east of the city center of Nancy. It was built in 1926 and has been used by Ligue 1 football team AS Nancy. Since summer 2010, Stade Marcel-Picot is one of the very few French stadiums equipped with synthetic turf.

Stade Marcel-Picot was opened on August 8, 1926, but only in 1935 the first ever football game was played on the premise, after the club AS Nancy was founded. The stadium initially consisted of only one real stand, with the rest of the stadium consisting of earth banks arranged in the form of a series of steps. The first new stand, called the Hazotte Stand, was built in 1973, and that resulted in an official capacity of more than 25,000. That official capacity, however, was significantly surpassed in a match against Saint-Etienne in 1976, resulting in a record attendance of 30,384 visitors. In 1978, the athletics track was removed and replaced with two new stands behind each goal.

Stade Marcel-Picot underwent a large redevelopment between 1999 and 2002. Three stands were completely rebuilt and the Hazotte Stand enlarged and refurbished, resulting in a fully enclosed modern stadium. During the renovation of the stadium, the leaders took the opportunity to pay tribute to two great Nancy players, Philippe Schuth and Roger Piantoni, by giving their name to the two stands behind the goals and previously called Marmite and Chaudron. Stade Marcel-Picot was initially selected to be one of the playing venues of the Euro 2016 tournament, which would have involved an expansion to a capacity of over 30,000 seats. The project, however, encountered funding difficulties, and the city of Nancy decided to withdraw from the tournament.

Today, the Marcel-Picot stadium looks like a fully enclosed arena with a seating capacity of 20,087 seated and covered seats. Comfortable and spacious, the stadium offers optimal conditions to welcome an audience of supporters, but also family in complete safety. Another expansion project is planned, bringing the stadium capacity to 32,000.

Nancy, alongside Lorient, was the first French professional club to have installed a synthetic turf pitch in 2010. The €1.5 million installation cost was a great investment which allowed the arena to host concerts and other events.