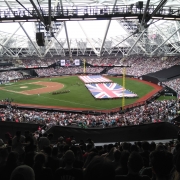 Since the American Major League Baseball organization targeted Europe as a key growth market, it knew upfront that the stakes would be high for any baseball game played on European soil. The London Olympic stadium was identified as being the perfect venue. The synthetic surface temporarily installed for the fantastic event delivered the finishing touch.

Following successful baseball campaigns in Australia, Japan, Mexico and Puerto Rico, American Major League Baseball (MLB) decided that the time had come to bring the game to Europe. They were well-aware that they were in for a massive challenge. The sport certainly has a significant following in Europe but finding a suitable venue would be a challenge of a different magnitude as there is no baseball-specific venue in Europe that could accommodate large groups of fans. Knowing that Londoners are ‘big event-goers’ and that the English capital hosts sold-out events frequently, the suggestion of MLB to consider the former London Olympic Stadium was well-received. The presence of an athletics track meant that the dimensions of the venue would afford enough space to fit a baseball field. Being a former Olympic venue, London Stadium still has many, if not all, facilities and quality standards that the MLB considered vital to delivering a game of huge magnitude. As the Boston Red Sox and New York Yankees quickly expressed specific interest in participating in the London Games, the MLB knew that it had secured all the ingredients necessary to establish a new benchmark. All that was left was to set for a date that would allow the preparation of the field at a time where the climate conditions would be best.

London Olympic Stadium is the home ground of West-Ham United F.C. and their summer break would be the best time-frame to change the field into a baseball field. With a concert scheduled for 1 June and a Diamond League athletics meeting scheduled for 20 and 21 July, dates in late June were be the only possibility left. All parties settled on 29-30 June 2019 to host two Boston Red Sox vs New York Yankees games.

With only three weeks to establish a field and another three weeks to return the venue to its official state, the decision was made to install a synthetic turf surface. Natural grass was not an option due to the little time available for the installation of the field, as well as the fact that, once removed, it couldn’t be used again in 2020. The 2019 event is the first part of a two-year deal. With rain hampering the preparations during 16 of the first 18 days, the organizers certainly counted their blessings for settling on a synthetic turf surface.

FieldTurf was contracted to produce the surface. They shipped over 15,000 square meters of its FieldTurf Vertex carpet from their plant in Auchel, France to the London venue. The carpet combines six ridged monofilament fibers that are tufted with one slit film fiber per tuft. This combination delivers an exceptional resilience and contributes to an appearance and behavior that resembles a natural turf field. A mixture of standard SBR, cryogen SBR and sand provides players with the required stability. Clay for the pitcher’s mound and home plate area, as well as dirt for the infield, was shipped in from the USA.

For the preparations, installation and removal of the field, MLB relied on input from local partners. They awarded the project to Hewitt Sportsturf and Slatter Sports Construction. Both companies are local partners for ESTC member FieldTurf Tarkett. J&E Sports, another ESTC member, was subcontracted to the project. All in all, 110 experts from the various companies were on site day and night, resulting in on-time delivery and the removal of the field in just under three days. All components used are currently safely stored in a warehouse near London to enable the use of synthetic turf for the 2020 games again.

The two games in London were the first ever at which the Red Sox faced the Yankees outside the USA. They were also the first in which both teams competed on synthetic turf. It didn’t bother either the management or players of either team. ‘It’s the first Yankees-Red Sox game out of the country, so why not a lot of firsts?‘ New York pitcher CC Sabathia remarked when asked by an AP reporter. ‘I think it will be fine,’ he added. Synthetic turf is the surface of choice in many USA lower league baseball competitions. It is also the surface used for the home grounds of MLB teams Tampa Bay Rays and the Toronto Blue Jays. ‘I am assuming it’s like Toronto’s or Tampa’s, so it shouldn’t be an issue,’ Yankees manager Aaron Boone said in the same AP article. Boone received support from Red Sox shortstop Xander Bogaerts. ‘If we had never played on turf, it would be different, but we’ve played on turf.’

All in all 50 runs were scored with the Yankees winning both games, the most ever in consecutive games between the Yankees and the Red Sox. More importantly, both games broke or met several records in MLB history. The three first-inning home runs the Red Sox had in the second game was an accomplishment that matched their earlier feat in their August 14, 1979 game. The eighth-inning homer by Didi Gregorius during this game extended the Yankees’ record of consecutive games with a home run to 31. The first game lasted for 4 hours and 42 minutes, three minutes shorter than the longest nine-inning game in MLB history. The 30 total runs scored during this game, were the second-most ever. Most importantly, perhaps, the attendance of 59,659 was the highest at any MLB game since September 28, 2003. Such attendance truly reflects the viability of hosting MLB games in Europe, while the temporary synthetic turf surface has proven its worth. ‘Around a third of the spectators at the baseball games came from overseas, generating millions of pounds for London’s hotel, restaurant and retail industries,’ London Stadium CEO Graham Gilmore said while pointing out how his venue and London had benefitted from the game. The London Stadium alone sold 80,000 pints of beer, 10,000 hotdogs and 2,600 bags of monkey nuts.

The 2019 games were part of a two-year agreement. If things work out well, they might soon be considered the curtain-raiser for much more than just four games. ‘We are in advanced talks with MLB about a new contract from 2021 onwards,’ Gilmore announced. He knows already that in June 2020 the London Stadium will host the St. Louis Cardinals and the Chicago Cubs. Both clubs also have a long-standing rivalry that will certainly fuel a need for victory.

Baseball fans all over Europe are eager to learn what will happen after next year’s games. Rumour has it that France is also keen to host a baseball event. If that is the case, MLB could follow suit with the American NBA and NFL and start incorporating European venues in its regular calendar. One thing for sure is that there is no need to worry about the surface or the ability of the synthetic turf industry to meet all requirements. Based on the several new records that have been set and feedback received from the fans, it can truly be said that they managed to deliver.