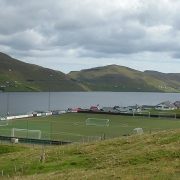 As of January 2012, Faroe Islands had a total of 22 registered football clubs; with 20 full size synthetic pitches, the highest ratio in Europe from a club to full size pitch perspective, with the Government paying 25% of the cost for each field as told by Virgar Hvidbro, General Secretary of the Faroe Islands Football Association.

Player participation in males under 18 has seen a 7% increase since 2004. Faroe Islands has a population of only 48,000 people, with the highest percentage of football participation in Europe and a particular fascination with English clubs. The football season follows the summer months and is played from April to September, with occasional brave forays into October.

According to Heri Nolsøe, director of the most successful club in the islands, Havnar Bóltfelag, (Harbour Football Club), “The weather in winter is very special and the wind is very heavy”. As the popularity of the game grows the need for pitches increases. Due to the harsh climate, growing and maintaining a grass pitch is incredibly difficult. While there is plenty of light during the summer, and plenty of rainfall, it doesn’t get warm enough for vigorous grass growth. Grass pitches soon wear out with regular use and cannot grow fast enough to repair. Most towns, and even the smallest villages, have artificial grass pitches which are used by everyone including schools for all types of sports as well as football. With nostalgia for the punishing days of old sand pitches, Nolsøe said, “It is much easier for players these days”.

By the year 2020, It is estimated that there will be an additional 10 full size synthetic football turf pitches in the Faroe Islands. 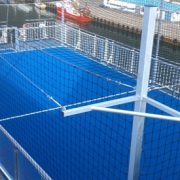 Smyril Line passengers were somewhat taken aback in early June: during the crossing from Denmark to Iceland via the Faroe Islands, they were able not only to enjoy the stunning views, but also to watch the installation of a Polytan|STI mini-pitch at the same time. Future travellers will have the chance to play football just above sea level on a pitch made of blue synthetic turf.

The use of a transparent band system means that the mini playing field blends in beautifully with the open deck, offering uninterrupted views of the waves and the horizon or the surrounding scenery at the same time. The idea is part of the new concept of the Smyril Line to offer something extra-special for young passengers on board. And the mobile mini-pitch with views is certainly not something you see every day.

When it came to installing the Polytan MegaTurf CPF synthetic turf in blue, Polytan|STI experts were faced with a few challenges: first of all, the installation had to be done whilst the ferry was in operation. The logistical details thus had to be perfectly coordinated – all the materials required were loaded in the port of departure. The installation itself was a further challenge: 15 millimetres of synthetic surface had to be removed from the ship’s deck so that a 25-millimetre thick elastic layer could then be installed. The Polytan|STI MegaTurf pitch was subsequently laid on top. Polytan|STI collaborated with BOS Sport und Werbung GbR of Münster on the installation of the one-metre band, including a two-metre-high net and net cover.