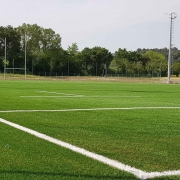 Asd Pesaro Rugby was founded in 1969 thanks to Tonino Uguccioni, the quintessential President who in 2007 was awarded the “Golden Oval” (Ovale d’oro) by the Italian Rugby Federation, an accolade reserved for those individuals who work to develop rugby. The club, currently in the Second Division, played in the top Championship Division for the first time in its history in the 2016-17 season.

To celebrate its 50th anniversary, a pitch in synthetic turf was installed alongside the natural turf pitch. “The club deserved this development: 50 years of glorious history constructed from hard work, our land, and friendship. In addition to growing the club, the structures also had to be improved. It was an important operation” – The words of the Mayor during the inauguration in November 2019. The result of an undertaking by the Municipality, owner of the grounds, which obtained 950,000 euro funding from CIPE (Interdepartmental Committee for Economic Planning, from the Development and Cohesion Fund 2007–2013) as an investment within the framework of the candidature for “European city of sport”, the operation was for the installation of a training pitch in synthetic turf, an addition to the natural turf pitch used by the first team.

For the new rugby pitch in synthetic turf, measuring 107 x 67 metres, with a 7-metre try zone, the customer chose an innovative turf solution. TriShape turf consists of a special fibre with a
characteristic structure comprising three sections that are combined and bonded, not twisted, with a diamond-shaped central reinforcement. The unique three-section structure, the textured surface and the special polyethylene polymer guarantee durability and excellent playing comfort. GEOLASTIC, the ecological, eco-compatible performance infill, consists of a blend of plant-based organic materials produced by defibering parts of trees, with a percentage of enhanced brown-colour encapsulated elastomeric granules derived from the mechanical shredding of worn-out tyres.

The system is completed by a performance underlay in closed-cell expanded polyethylene, 23 mm thick, designed to provide very high levels of performance, and surface drainage by means of specially-gouged channels.