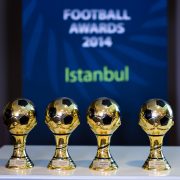 TigerTurf landed the award for its installation of a third generation (3G) playing surface at Hamilton Academical FC’s New Douglas Park. The award winning TigerTurf Total Turf 60XQ has been in place at the Accies’ home stadium since the start of the 2013 / 14 campaign and has consistently performed at FIFA’s elite level, and has led to Hamilton securing promotion to the Scottish Premiership (SPL) in their first season playing on the new TigerTurf pitch.

The award resulted from an industry-wide vote, which saw key individuals from leading European football associations and leagues decide that the leading 3G surface at New Douglas Park should be honoured with the industry-renowned title from ESTO.

Since the club’s promotion, the surface has also been re-tested and achieved FIFA 2* accreditation – the highest global standard for artificial turf – meaning it has maintained its high performance standards.

Paul Langford, Managing Director of TigerTurf UK commented: “It’s fantastic that our surface has received international recognition in the prestigious ESTO Football Awards, and staff throughout the business couldn’t be more proud of this achievement. We’re pleased to see our surfaces are maintaining peak performance and aiding sportsmen and women across the globe to fulfil their sporting dreams.”