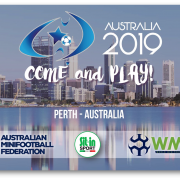 Sit-in SPORT and WORLD MINIFOOTBALL FEDERATION have renewed their Partnership for another two years.

Next WMF World Cup in Perth ( Australia ) in October 2019 and the EMF finals in 2020 will be played on a Sit-in Sport no-infill turf,

as indeed in the last 6 editions of the EMF finals.

The term ‘minifootball’ means small sided football open for amateur players. The competitions focus on player development, teambuilding, fair-play and inter-relations between millions of players who take part in minifootball at a world level. Recent years have seen a significant growth in the numbers of people that are playing minifootball.

Minifootball is played by millions of players around the world. WMF has branches in almost 100 countries on five continents – America, Europe, Africa, Asia and Australia. and organises the WMF World Cup every 2 years, as well as continental championships through the established continental federations.

Using its feeds, WMF creates ways to increase the number of spectators in football stadiums and, together with the activation of its membership base, increases the value of football towards its partners.

Sit-in SPORT identifies itself fully with these values and adopted the motto of EMF: YOU PLAY !!!