Advanced Sports Installations Europe (ASIE) has entered into a cooperation agreement with Øvre Romerike Waste Company IKS (ØRAS) for the cleaning of discarded artificial grass sports fields at the waste facility in Dal Skog, Norway. The agreement includes storage and sorting within ØRAS area where the company is authorized to receive such materials.

The cooperation that ASIE has entered into with ØRAS provides the opportunity to work on reuse, material recovery and energy utilization of discarded sports fields.

Much research and development are being conducted on the use of alternative “infill” in artificial grass fields, but it is a fact that there are approx. 1700 artificial grass fields with rubber granules only in Norway. There are at least 20 000 fields in Europe with average lifespan of 10 years creating huge number ow waste stream. It is important to have sound and approved receiving and processing solutions that promote the reuse and recycling of materials when discarded. This is in line with the waste regulations and national environmental targets. It is also important that this circular concept can reduce the need for transport of discarded fields and the consumable materials.

ASIE is now working with partners on operating routines, environmental risk assessments and plans for the operational activities across Europe. 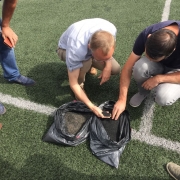 Renovating a synthetic turf football field requires the removal of the old materials – up to 300 tons of rubber, plastic and sand – which is often simply considered mixed waste that has to be transported to landfill sites or incinerators and disposed of. This is both expensive and a significant burden on the environment.

This successful event saw more than 15 companies from Belgium and Netherlands.  The success can be contributed to this unique technology and service to the municipalities, clubs and operators who have a considerable amount of investments into synthetic turf fields in their region.  With the machines in operation, the visiting public were amazed at our technology and how the process has been so refined that made the removal and processing of the field effortless and without any damage to the sub base or the infrastructure of the field.  Now that the materials have been separated on site, everything can be reused back into the sports industry with ZERO impact to the environment.

As a company specializing in the installation of sports surfaces with a strong focus on innovation and the circular economy, Advanced Sports Installations Europe has developed a new technology, the ARENA concept, which enables the reuse and recycling of all materials in the synthetic turf on site, reducing the environmental impact by 70% for field renovations.

Advanced Sports Installations, one of the leading companies in Europe specialising in the installation, maintenance, renovation and recycling of artificial turf, won main prize in the competition Environment-Friendly Enterprise of the Year in Estonia.

Advanced Sports Installations Europe AS (ASIE) was announced general winner in the competition Environment-Friendly Enterprise of the Year in Estonia for developing the world’s unique ARENA Concept, an innovative zero-waste method for reusing artificial turf on site in just 7 days.  Company also received the most e-ballots during public voting in its category. At the official ceremony on the evening of January 25, the Award was given to Raul Lättemägi, the ARENA Concept owner, by Minister of the Environment Siim Kiisler.

Raul Lättemägi, Owner of Advanced Sports Installations Europe (ASIE) would sincerely like to thank jury of the competition and everybody who voted for the company during public voting.  “As a socially and environmental responsible company, we place strong emphasis on sustainability, as replacing artificial turf installed on football pitches generates 600,000 tonnes of mixed waste consisting of rubber, sand, and plastic each year in the European Union. By 2030, this volume of waste will increase 5 times, leading to over 3 million tonnes. Our ARENA Concept enables us to separate different components of the removed artificial turf so that it can be reused on training pitches and/or school grounds, thereby avoiding the generation of millions of tonnes of mixed waste every year,” said Lättemägi.

According to Lättemägi, the advantage of the ARENA technology is that almost 100% of the infill could be recovered from the football pitch. “As the entire replacement process is performed on the football pitch and given the minimal need for transport, CO2 emissions are several times less. We can reinstall most of the removed turf covering on training pitches or football grounds of schools, for example, which is less costly and is also significantly more sustainable when compared to other operators. The last stage of circular economy is the artificial turf recycling plant, which turns unusable, badly worn artificial turf into plastic granules, which are a valuable raw material for the plastics industry,” he explained

ASIE has twice received innovation support from EU Framework Programme for Research and Innovation Horizon 2020 to develop the world’s unique ARENA Concept, an innovative zero-waste method for reusing artificial turf on site and working prototypes of its machinery.

The competition Environment-Friendly Enterprise of the Year is organized every year to determine the environment-friendly enterprises that have taken actions with a positive influence on the environment. Through acknowledging the winners other companies, organizations and private persons are inspired to use similar nature-friendly solutions.

Photos taken at the official ceremony on the evening of January 25: https://goo.gl/W7eeU

Photos about implementation of the ARENA Concept https://goo.gl/QsJujf