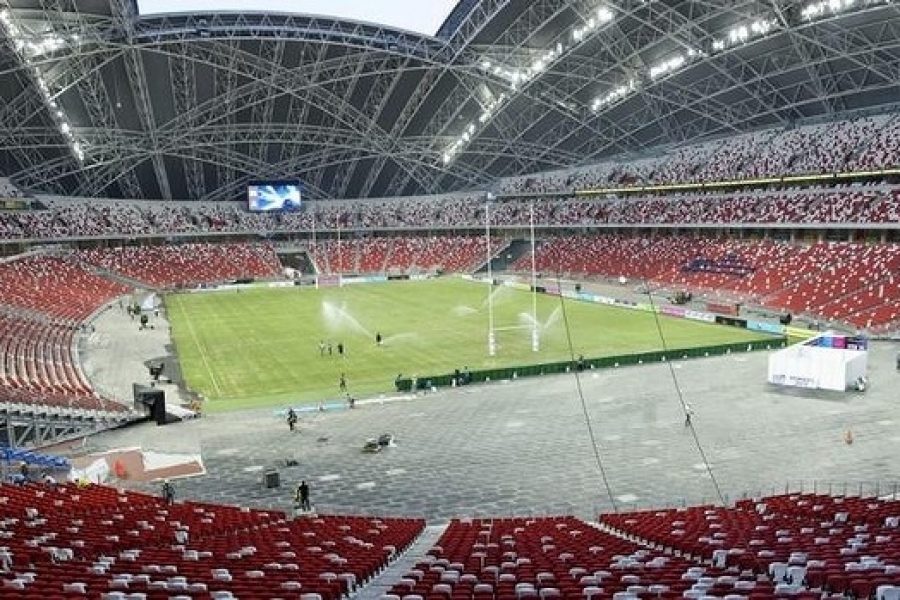 The Singapore National Stadium is located in Kallang, Singapore. The National Stadium is a multi-purpose arena used mostly for football matches featuring a dome and retractable roof. It is the only stadium in the world custom designed to host football, rugby, cricket and athletics events. With a mechanised and automated retractable seating configurations on the lowest tier, the arena can also host concerts, cultural and other entertainment purposes at any time. It takes approximately 48 hours to reconfigure seating arrangements to suit an upcoming event. The stadium has a maximum seating capacity of 55,000 for football and rugby, 52,000 for cricket and 50,000 spectators for athletics events.‪

Originally a hybrid grass pitch was installed in the National Stadium. It was said that the durability and the versatility of the hybrid grass pitch meant long-term cost savings. After a series of complaint, due to the grass not growing well and players were concerned that the excessive amount of sand would get into the eyes of players and potentially cause injuries, they decided to change the surface of the pitch and they wanted to replace it permanently with synthetic turf. This unexpected U-turn came after months of controversy and spending S$1.5 million on new lighting equipment to try to improve the quality of the National Stadium pitch.

Finally, instead of installing a synthetic pitch, they opted for a different type of hybrid pitch. The technology combines natural grass with artificial grass – but is recognised by FIFA as a 100% natural turf. With the natural grass above the synthetic fibres, the system creates a wholly natural playing surface. The roots of the grass plant interweave with the artificial fibres in the product matrix to stabilise the turf and give protection to the natural grass. The artificial fibres and open weave backing provide both vertical and horizontal stability to the playing surface while also dramatically increasing the load bearing capacity of the turf. They have also put in place growth lights, additional fans for air movement and made improvements to the pitch irrigation system. Furthermore they have also installed moisture and temperature probes to manage the climate in the stadium.

UK makes a positive move on sustainable recycling of used worn out artificial...