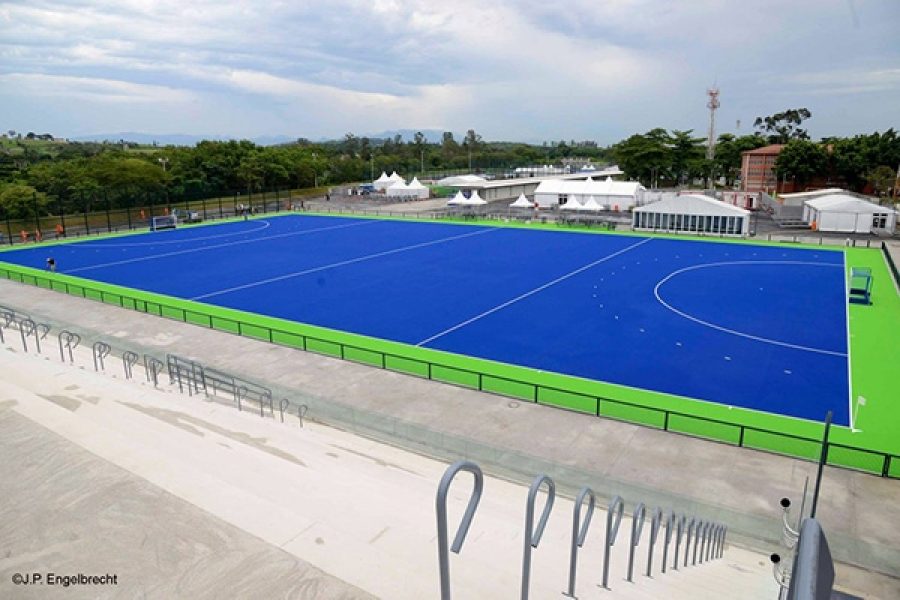 The hockey venue for the Rio 2016 Olympic Games was unveiled last 20th of November by the Rio de Janeiro City Government. This event highlight was the sight of a magnificent hockey synthetic turf pitch displaying symbolic colours for Brazil. When combined, the blue pitch, green border, white lines and yellow ball make up the colours of the host nation’s flag. The main pitch of the complex will have 8,000 seats during the Games, with 2,500 remaining afterwards as heritage.

“This is the best surface that exists for playing hockey, the most modern in the world,” said Claudio Rocha, the coach of Brazil’s hockey men’s team, one of 11 sides already confirmed for the 12-team Olympic tournament. “It’s very important for our sport in Brazil to have a facility of this level,” said Brazil’s goalkeeper Thiago Bonfim, who helped the team confirm their place at Rio 2016 by finishing in the top six at this year’s Pan-American Games.

The Olympic Hockey Centre is located in the Deodoro Olympic Park of Rio and will be the second largest concentration of competition venues during the Olympics. The venue has three pitches made of synthetic grass – two match pitches of 91.4m x 55m and one warm-up field of 45.7m x 55m. The venue was built for the 2007 Pan-American Games and is being adapted to meet Olympic standards.

After the Games, the hockey venue will host top-level teams, including the national team, as well as social projects. “The structure we have today, with the floodlights and the warm-up pitch, is how it will be after the Games. It will be a legacy for the sport and the city,” said Luciano Elias, the Rio 2016 hockey venue manager.

“Today hockey may not be such a well-known sport in Brazil, but after the Rio 2016 Games, this Olympic Centre can be a turning point for the sport in the country,” said Rio mayor Eduardo Paes.