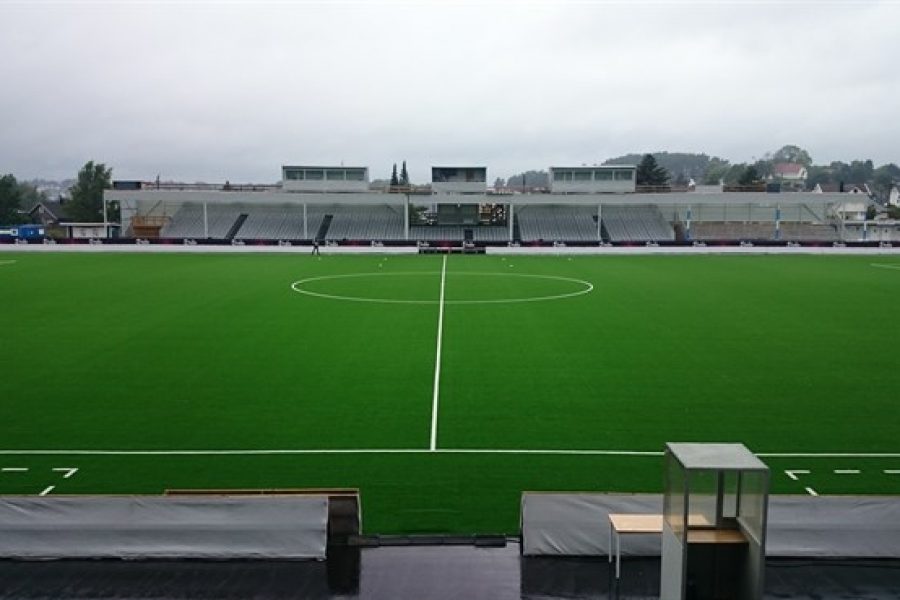 As the winter season in Norway may be harsh with football natural grass pitches, it is unsurprising to see that many football stadiums hosting Tippeligaen (Norwegian 1st division) fixtures are equipped with synthetic turf pitches. One of them is the Sarpsborg Stadion, in the south Norwegian city of Sarpsborg , which is the home stadium to first division club Sarpsborg 08 FF. This club (under this name) was founded in 2008, after an ongoing collaboration of many Sarpsborg-area football clubs, with a new jersey and new name.

The Sarpsborg stadium features a FIFA Recommended 2 Star synthetic turf pitch and has a capacity of 4700 spectators, it first opened in 1930, with artificial turf laid in 2009 and the newest stand completed only last year. It was recently one of the venues hosting the UEFA European Women’s under-19 Championship in 2014.

The installation of a synthetic turf pitch in the Sarpsborg stadium accompanied a development of this surface in Norwegian football, with nearly 900 full-size synthetic turf pitches existing for 1931 registered football clubs in Norway by January 2012. Many reasons can explain this, one of which is outlined by Ole Myhrvold, Head of Construction at the Norwegian Football Association: “we are forced to extend the season, and the clubs cannot manage this in a good way with natural grass. Our aim is to make football an all year sport, this requires artificial pitches”.

So the synthetic turf at the Sarpsborg stadium is an appropriate surface as it is a pleasant playing surface and an excellent alternative to natural grass in the Norwegian weather conditions, but is above all possible to use all year round unlike natural grass pitches. Indeed, it offers much more operating hours, mostly in winter. Along with the usual synthetic turf characteristics (soft, even and stable surface, good shock absorbance), it will also reduce drastically maintenance costs and offer consistent playing conditions for Tippeligaen fixtures that demand high pitch quality standards.