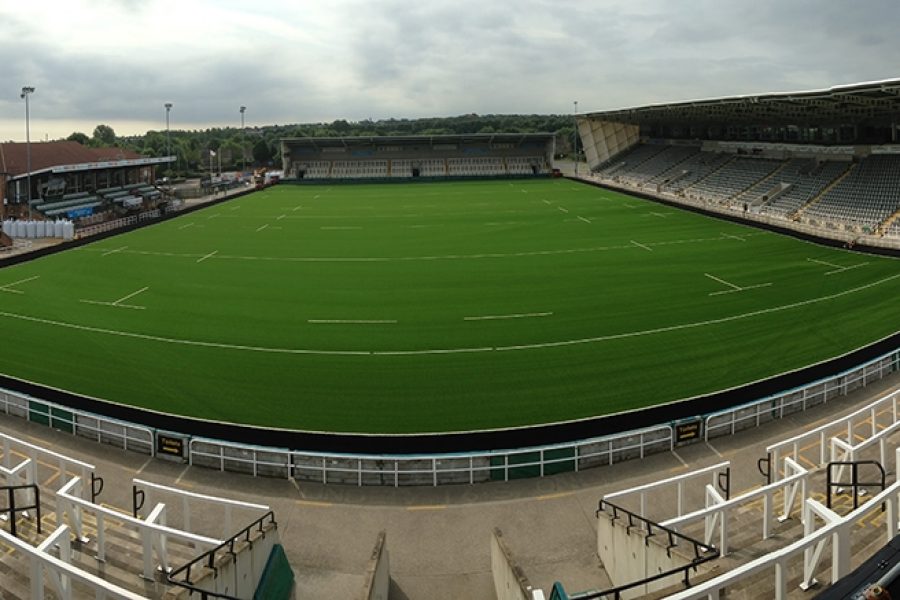 After experiencing a number of issues with their grass pitch at Kingston Park, the Aviva Premiership Rugby club Newcastle Falcons have recently installed a brand new synthetic turf pitch at their home stadium. Indeed, over recent seasons, issues with their pitch were resulting in an inconsistent and heavy surface in a number of areas. This notably follows the same type of installation at Saracens’ Allianz Park stadium.

Following approval from the Newcastle City Council and Premiership Rugby Board, the club proceeded to building the new synthetic turf pitch during the summer ahead of the 2014-2015 rugby Premiership season. For the season opener on their brand new turf, the Falcons faced the London Irish at Kingston Park, bringing in their biggest opening crowd for 8 years, with nearly 6000 loyal supporters going to watch the game. Newcastle director of rugby Dean Richards said the “new surface will undoubtedly produce a more free-flowing entertaining style of rugby at Kingston Park”, which can help to keep up the good attendance to the games. “There is also the potential for community use of the pitch on and around match days which will benefit the sport in our region,” he added.

This new surface will ensure that the surface is always playable, irrespective of the weather, consequently preventing match postponement caused by a sometimes merciless North East weather. Also, the falcons’ players and coaches all expressed good first impressions of the pitch after their first training session on it, as defence coach Graham Steadman said: “the boys have responded positively to the artificial pitch and the consensus in the changing room is that the squad can’t wait to get a game on it.”