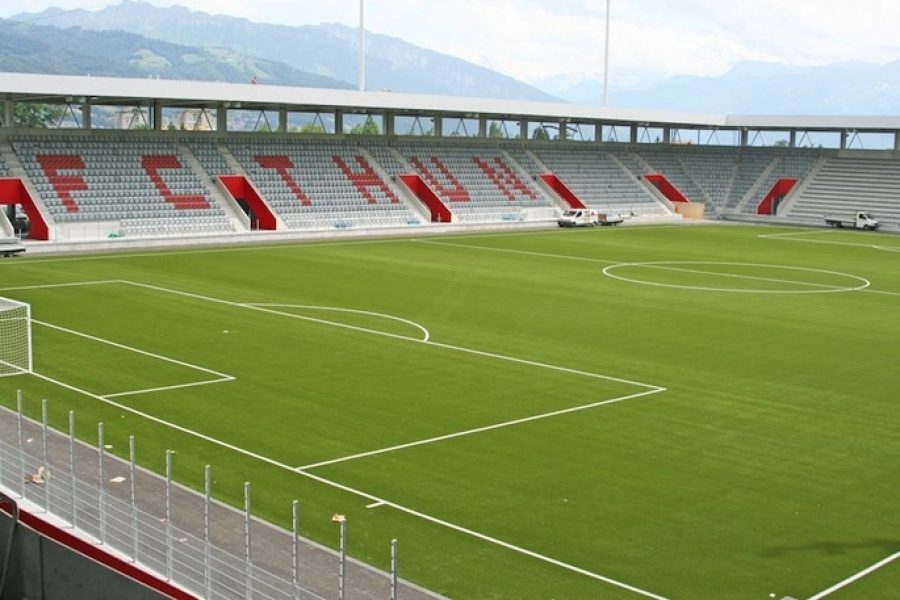 Inaugurated in July 2011 as the Arena Thun, the now-called Stockhorn Arena (following a partnership deal in2014) is a football stadium located in the Swiss city of Thun. It is the home ground of Swiss Super League side FC Thun and holds a capacity of 10,000 spectators. Since its opening, the stadium has hosted FC Thun’s fixtures on synthetic turf.

Back in 2010 when their new stadium was in construction, FC Thun decided, unlike FC Luzern and their new stadium being built at the same time, to install a synthetic turf pitch. Therefore 8214 square meters of FIFA 2-star certified synthetic grass were laid a few weeks before the inauguration of the stadium.

This choice of surface was partly informed by an economic aspect. “The synthetic turf allows us the simultaneous planning and implementation of match day operations as well as other types of events and gives us the greatest possible flexibility. This is imperative for the management of a stadium of that size, “said club CEO Alain Kappeler. As to the sporting aspect, synthetic turf was seen positively by FC Thun and its supporters because the club was used to bringing home great results from different away games at venues with this surface (successive wins at Neuchâtel Xamax and canton rivals Young Boys Bern).

Another aspect that supported the choice of installing synthetic turf was its all-weather playability. Indeed, the synthetic turf has high water permeability and is playable in all weather conditions. Pitch conditions at the beginning of 2011 in the previous stadium with natural grass finished to convince FC Thun about the benefits of synthetic turf as the players had to play regularly on a “potato field”. Therefore, according to Reto Bloesch, media officer of FC Thun, “It makes for us sense that we have opted for synthetic turf”.

Lush green with a pleasant look and feel