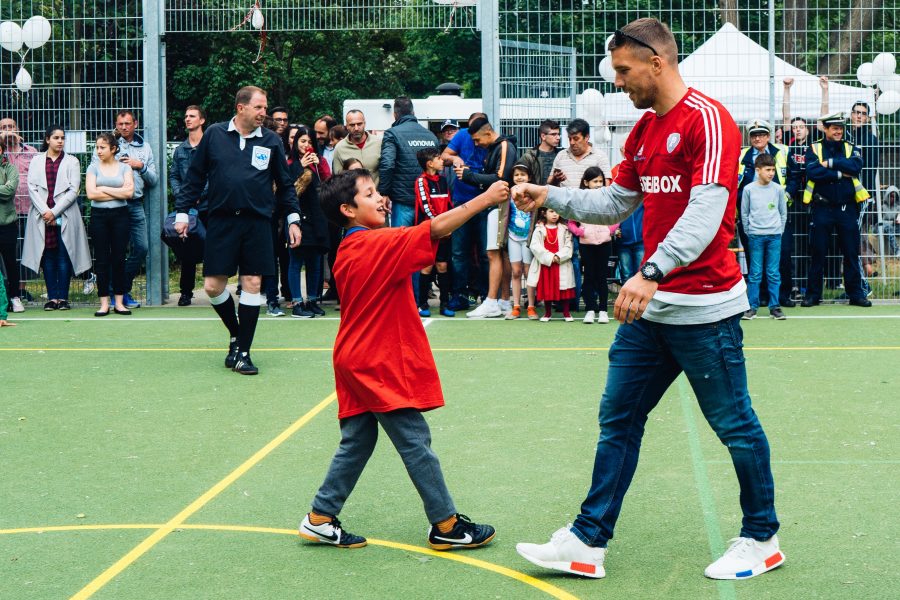 The “Langobardenplatz Gremberghoven” project run by the Lukas Podolski Foundation and RheinFlanke gGmbH (youth and refugee work through sport) started at the end of 2014 with the “LP2014” fund-raising campaign. The collective aim was not only to renovate the existing youth centre of RheinFlanke in Gremberghoven, but also to create a modern, functional sports facility for children and young people at Langobardenplatz. The background to this scheme was the high demand for youth welfare services in the Gremberghoven district, where a new youth centre combined with a sports ground is an ideal way to provide facilities to cater for specific groups.

The sports ground has now been completed thanks to the support of numerous partners – most notably Vonovia SE and the City of Cologne – and comprises a synthetic turf mini-pitch and a multipurpose pitch suitable for football, basketball and volleyball for example. It is also directly adjacent to a new youth centre, which has been built from converted and extended maritime containers. The project came in on budget thanks, among other things, to the help of partners – Polytan also did its bit by coming up with an attractive offer and dispensing with the usual margins.

The sports ground and youth centre – the “Grembox” – were officially inaugurated on Wednesday, 7 June 2017 by staging an opening match for young and old alike, including Henriette Reker, Mayor of Cologne, and World Cup winner Lukas Podolski.

The mini-pitch and the multipurpose pitch both come from Polytan and are part of the third “STRASSENKICKER.COURT” project for which the Burgheim-based sports surface specialist received a construction contract from the Lukas Podolski Foundation. The two other projects are located in Cologne-Bocklemünd (1x mini-pitch) and at Holzmarkt in the Altstadt-Süd district of Cologne (2x multipurpose pitches and1x mini-pitch).

In future, children and young people from the Cologne-Gremberghoven district will be able to play sport on a 15 x 20 m synthetic turf pitch and a 20 x 30 m multipurpose playing field in the newly opened Langobardenplatz facility. Matches will be held on a LigaGrass Pro CoolPlus pitch, an optimally cushioned and robust synthetic turf system filled with sand to make it as easy as possible to maintain. The surface chosen for the multipurpose pitch was the water-permeable, hardwearing PolyPlay S all-rounder, which is non-slip in spite of its smooth surface and can be used all year round.

Although Lukas Podolski kept himself informed about the progress of the build and stopped by in person twice during the construction phase, he did not see the end result until it opened. He could barely tear himself away: “The sports ground and the youth centre have turned out just great – modern and professional, but still a proper football pitch like it was in my day. This was exactly what I aimed for from the start: to give children and young people, some of whom live in difficult circumstances, the opportunity to play sport for free at a high-quality facility. And of course the whole thing’s in “my” city, Cologne, where it’s really important to me to give something back and express my sense of belonging.”