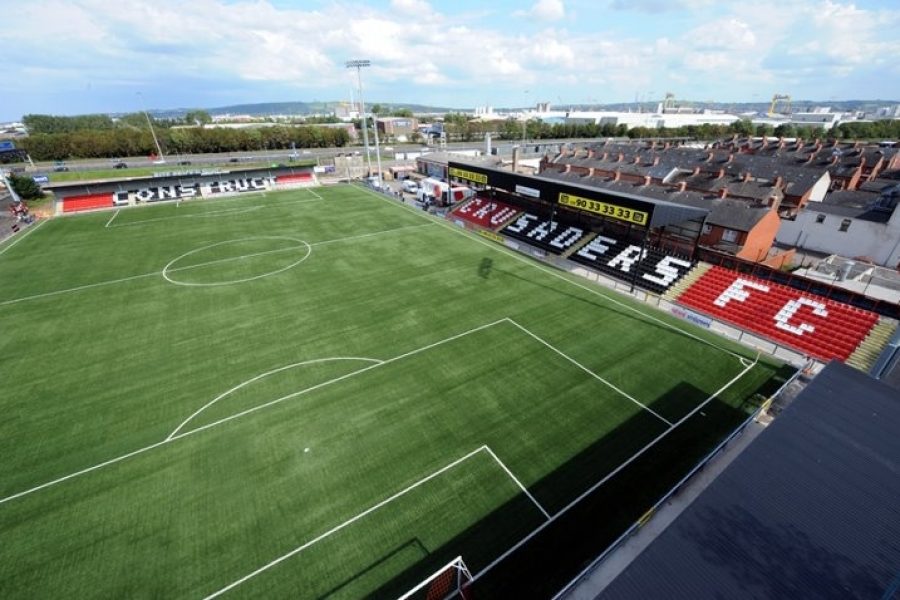 Since 2010, Crusaders FC, one of the top football clubs in Northern Ireland and based in Belfast, has been used to playing their home games on a synthetic turf field. They are a semi-professional club founded back in 1898, playing in the Danske Bank Premiership – the Northern Ireland Premiership, for which they are the current champions. The club indeed won the league last season for the 5th time in their history.

Before the installation of the synthetic turf pitch at their Seaview Stadium which holds a capacity of 3,383 seats, the club needed an alternative to natural grass, due to the harsh winter climates. At the time, the club demanded a surface that performed like natural grass and protected the players from impact and lower extremity body movements. After an internal review of costs and benefits, Crusaders FC opted to install a synthetic turf pitch.

The transition to this synthetic football turf at Seaview proved fruitful for the club. The pitch at Seaview Stadium became the only field to survive the harsh weather conditions over the winter period.  It also allowed the stadium to expand its potential uses especially after earning the important FIFA Two-Star certification.  This FIFA recommended pitch enabled Seaview to host international competitions as the FIFA field test confirmed the highest playability, safety and performance.

The team played at a variety of venues before settling at Seaview in 1921, year of its official opening with an inaugural league fixture won over Belfast rivals Cliftonville FC.

Since 1972, Seaview has been the venue for the Steel & Sons Cup Final, which is traditionally held on Christmas Day (unless the game falls on a Sunday). Only two finals have not been played at Seaview since then, the 1975 final and the 1984 final replay. Crusaders also share Seaview with amateur side Newington.

In 2010, after European funding was declined, funding was secured from a private investor for the club to move to a new stadium in the Duncrue area of Belfast, near the docks (about 3/4 miles from Seaview) within “5 or 6 years”. It is that year that Crusaders became the first team in the Northern Irish League to install a synthetic pitch. This move has ensured that postponements due to bad weather have not affected Seaview as much as other grounds. Other clubs have since followed through, with Cliftonville installing a synthetic pitch the following year and Bangor in 2013.