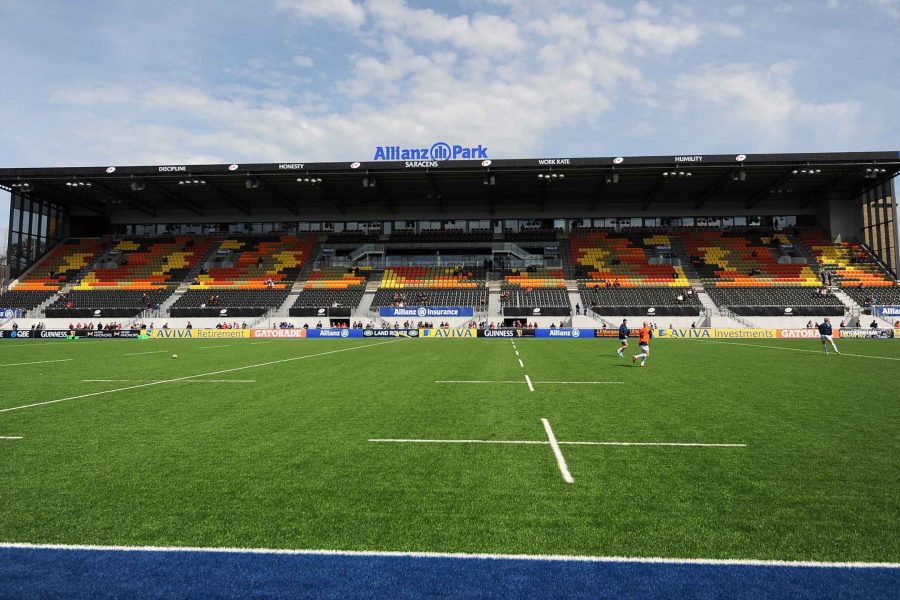 As the winter draws in, members of the ground staff at Rugby clubs across Europe are preparing to face an increasingly difficult battle to protect their pitches from the seasonal elements.

In the wet and the cold, those who nurture the playing surfaces will have their work cut out to make sure their team can take to the field on the best surface possible.

However, this year two big clubs in the sport took a major step towards making such uncertainties a thing of the past.

In January, English team Saracens became the first professional Rugby club to host a match on an artificial surface in an LV Cup clash against Welsh team Cardiff Blues at Allianz Park. Eight months later, Saracens’ opponents in that opening fixture followed suit by making their debut on their own newly-installed artificial pitch at Cardiff Arms Park.

“One of the major advantages of the new artificial pitch is it is now accessible to a wider audience and has been a massive boost to our region,” Cardiff Blues’ Stadium Manager, Lisa Peterson, said.

“The local community has been very busy using it – both on match days for Cardiff Blues and Cardiff RFC and non-match days. It is fantastic to see so many young aspiring rugby players from schools and clubs getting the chance to train and play on the same pitch as their heroes.

“Even in wet weather we are able to provide a safe environment for people to use around the clock. The feedback has been extremely positive from all users.

“The decision to install the new pitch has also been further justified after we were awarded the 2013/14 Amlin Challenge Cup Final. It is a huge privilege for us to be chosen to host such a prestigious occasion and the ERC share our excitement about using the new artificial pitch for such a huge showpiece final.”

It is too simplistic to simply call these artificial surfaces ‘plastic pitches’ – a phrase that conjures up an image of hard, bouncy surfaces that would be unsuitable for scrums, mauls and other subtleties of Rugby. These surfaces are highly sophisticated, meeting exacting standards of the International Rugby Board as well as the players.

The launches mean that 2013 has marked a transitional year for artificial pitches in Rugby.

However, the IRB has been at the forefront of a groundbreaking initiative that has aimed to redefine the use of artificial turf, and boost global participation in Rugby.

In September 2012, the IRB held the first ‘One Turf’ conference in Dublin. The primary aim of ‘One Turf’ initiative is to regulate and standardise the development, performance and maintenance of artificial turf worldwide whilst making sport as accessible as possible, regardless of the extreme or temperamental weather conditions in countries across the globe.

“We are trying to get as many International Federations and sports involved as possible to develop an artificial turf system that is suitable for needs of each of the sports involved at the grassroots level,” the IRB’s Technical Services Coordinator, Leanne Walsh, said.

“The idea behind it is that local and national government are far more likely to invest in a community facility if it can provide a service for multiple sports. We are trying to promote healthier lifestyles by giving people more opportunities to participate in a myriad of sports through providing these facilities.

“In terms of the training and community levels of the sports, the requirements are pretty similar although there are some technical requirements that vary.”

In May 2011, the IRB reduced the minimum pile height of the artificial turf from 65mm to 60mm, and further research is taking place into how all these sports can align from a technical requirements point of view.

It is hoped that a standard can be achieved next autumn that will allow grassroots Rugby players to benefit from outstanding year-round training and playing surfaces.

“This standard is intended primarily for use at the grassroots level and will serve as a development tool to increase participation in Rugby and the other sports codes involved. There are huge benefits involved in adopting artificial surfaces,” Walsh said.

“At the moment we are trying to establish basic standards, but further research is needed and there are other details to finalise before this can be put into practice.”

The proliferation of IRB-accredited artificial pitches has been considerable over the past five years. In 2008 there were eight artificial surfaces approved by the IRB. Now there are more than 130 that meet the governing body’s specifications worldwide.

Nigel Fletcher, the Executive Chairman of the European Synthetic Turf Organisation, added: “The durability and performance of synthetic turf in Rugby is an important development in growing Rugby globally.

“The quality of the surface can be guaranteed all year round with good maintenance and ensures players performance whether at community or professional level.”

According to Walsh, there are also significant long-term financial benefits of installing artificial surfaces, aside from the increasing likelihood of government support for such a facility if it can cater for different sports.

“There is an up-front investment required, but these facilities can also generate revenue which will reduce costs in the long run,” she added.

“We would always recommend that a club has a business plan before installing the surface. It is much more durable than natural grass which allows for additional income generation, with other events and sports able to take place on the pitch.

“With correct maintenance these pitches can last for years, and it is great to see that more and more clubs are coming round to looking at artificial turf as a viable alternative to natural.

“The examples of Saracens and Cardiff Blues show how clubs are being more receptive. The players have also embraced the pitches, and all of the feedback so far has been great.”