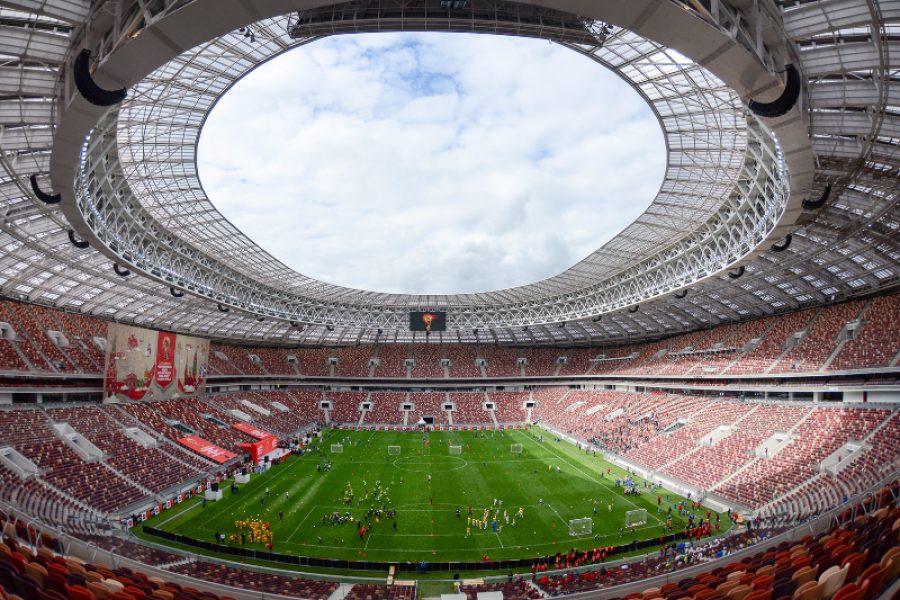 All football fans’ eyes will be on Luzhniki Stadium in Moscow on July 15 when the national stadium of Russia will host the World Cup 2018 Final.

But little did everyone know, Moscow’s giant, with a total seating capacity of 81.000, was one of the first major European stadia to use a synthetic turf pitch which was installed in 2002 to counteract adverse weather conditions. Also, one of the first international fixtures played on synthetic surface was the one between England and Russia during the 2008 European Championships qualifications on 17 October 2007 which took place at Luzhniki.

Luzhniki is not only one of the largest stadiums in Europe but also one rich in historical events. Built in 1954 following a decision by the Soviet Government it became the part of the Central Lenin Stadium. It owes its name Luzhniki, which can be roughly translated to ‘the meadows’, to where it’s situated – the meadows of Moskva River. Luzhniki was the main stadium of the 1980 Olympic games, hosting the opening and closing ceremonies, as well as the final of the football tournament. It also witnessed Russia’s worst sporting disaster – on 20 October 1982 during a UEFA Cup match between FC Spartak Moscow and HFC Haarlem 66 people died in the stampede.

In various years, the stadium used to be home for such well known teams as CSKA, Torpedo or Spartak Moscow. Currently, although it is not used as a primary ground for any of the professional football teams in Russia, it is home to the national squad and hosts most international friendlies or tournament qualifying matches. The original stadium was demolished in 2013 to make way for the construction of a new stadium. The self-supported cover was retained. The facade wall was retained as well, due to its architectural value and later was reconnected to a new building. Construction of the new stadium was completed in 2017.

Luzhniki is the biggest stadium in the world to almost constantly use synthetic turf pitch for the purpose of hosting football games. Although synthetic turf is no surprise for Russian teams, it is not yet a standard for other European clubs, hence in 2008 the Champions League Cup final UEFA ordered that the game must take place on grass, so a temporary natural grass field was installed just for the final. Although the World Cup 2018 final will also be played on a natural pitch, it is interesting what the upcoming years will bring to the pitch type standards across Europe.