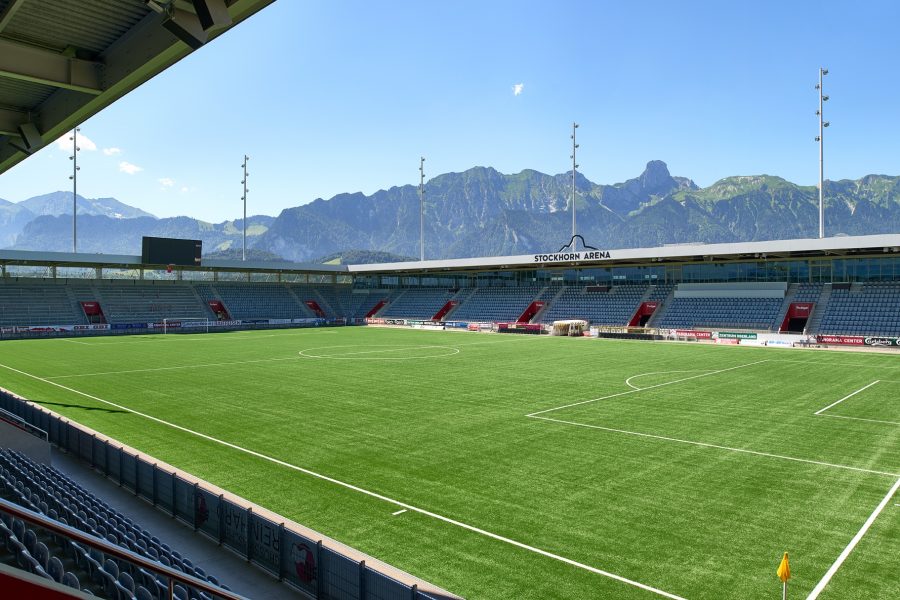 Framed by the Swiss mountains with stunning views over the Stockhorn, Niesen, Eiger, Mönch and Jungfrau, the Stockhorn Arena in Thun in the Bernese Oberland was completed in 2011. The stadium is both the home ground of FC Thun 1898 and an ultra-modern multipurpose complex with adjoining shopping centre, underground parking for 900 vehicles and a 5,400 square metre rooftop solar plant to generate electricity. The arena will hold 10,000 spectators for a football match, whilst capacity can be increased to 20,000 during one of the numerous other events held there. The professional players at FC Thun finished the 2015/16 season ranked sixth in the Swiss Super League. The clubs greatest successes include the group stage of the Champions League 2005 and the group stage of the UEFA Europa League in the 2013/14 season.

The top-flight professionals have played on synthetic turf since the stadium was opened on 9 July 2011. The turf that had been there from the start had to be replaced in June 2016 as it was worn out, and the club opted for the LigaTurf RS Pro II CoolPlus. The synthetic turf system from Polytan is certified with the “FIFA Quality Pro” seal of approval. Not only does this demonstrate the high quality of the new sports surface, it also makes the pitch officially suitable for international fixtures. The pitch was designed and installed by Bächler + Güttinger AG of Kiesen.

There were a number of reasons why Genossenschaft Arena Thun opted for synthetic turf in the Stockhorn Arena. The main one was the alpine weather conditions in the Bernese Oberland region. The pitch often has to be cleared of snow after one of the frequent and heavy falls in the winter – mechanical stresses that synthetic turf survives unscathed compared to real grass. In addition, the upkeep of synthetic turf is considerably cheaper than is the case with natural growth, with care and maintenance costs coming to only around one third of the expenses for natural turf. And, last but not least, the average service life of up to 1,800 hours a year was a decisive factor – it is normally possible to play on real grass for 600 hours before the subsoil is no longer adequate to meet the demands of regular matches.

The decision in favour of synthetic turf enables three teams to train and play at the Stockhorn Arena all year round without having to put up with the disruption caused by bad weather. Officials specifically selected the LigaTurf RS Pro II CoolPlus synthetic turf system from Polytan on the basis of recommendations from other stadiums and the good price-performance ratio.

The Stockhorn Arena means that there are now two football stadiums in Switzerland where Super League matches are played on synthetic pitches. The first was the Stade de Suisse in Bern. BSC Young Boys, the holders of several Swiss titles, have played there on a LigaTurf RS Pro CoolPlus pitch from Polytan since 2014. It is also “FIFA Quality Pro” certified.