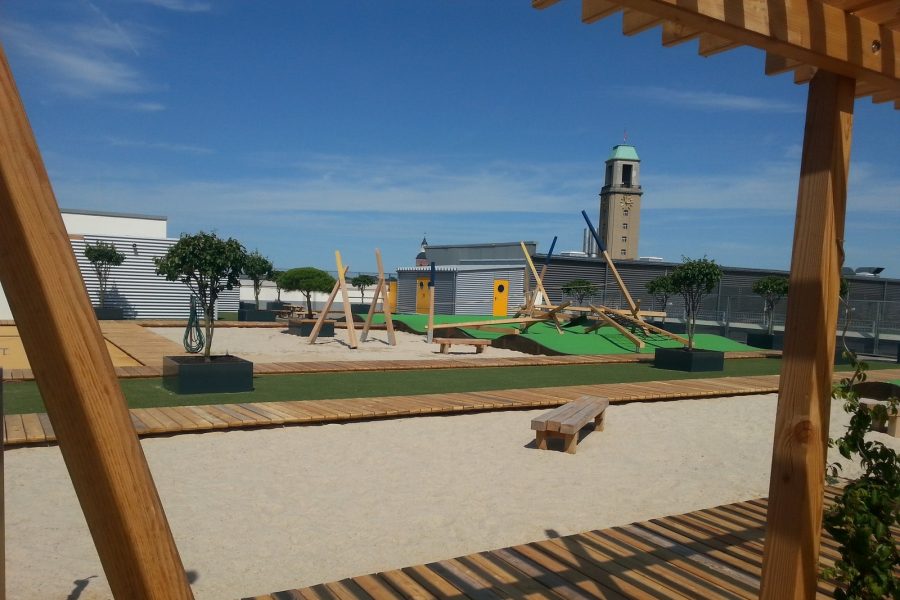 The kindergartens and crèches run by Klax represent a concept of education that believes in giving children a stimulating environment and encouraging their creativity. In keeping with this approach, in June and July of this year Polytan installed an unusual playground at the Klax “Karlsson vom Dach” childcare facility (the German name of the cartoon character Karlsson on the Roof), which is situated on the roof of a shopping centre in Berlin-Spandau. Polytan worked in close collaboration with the landscaping architects Schirmer-Partner and the company Rumpf to plan and implement the project. The results of this cooperation are more than spectacular.

Within just four weeks, the team laid around 450 square metres of soft-impact surfaces in differing shapes and thicknesses high in the air on the roof of the Spandau Arcades. A special feature and, at the same time, a particular challenge with this order was the undulating playing surface, which had to be applied on top of a specially prepared foundation. Children can use this to practise their sense of balance and have fun at the same time, for instance. The play equipment blends seamlessly into this undulating landscape. Together with a range of plants, the child-friendly Polytan synthetic turf provides a touch of greenery for the rooftop playground.

The centre’s 90 children can now run around outside to their heart’s content. The Polytan soft-impact coverings are of course HIC-tested and provide reliable protection against head injuries. Perhaps the character after whom it is named – Karlsson on the Roof – will come flying past the kindergarten!