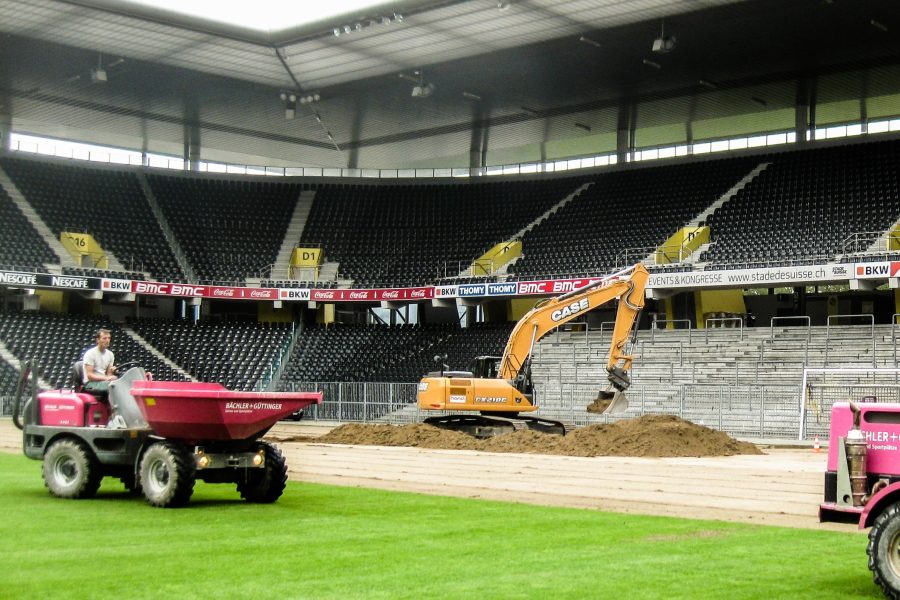 A pitchmade from LigaTurf RS Pro CoolPlus, the latest generation of synthetic turf from Polytan|STI, is being installed in the Stade de Suisse in Berne over the coming days. The old grass pitch no longer meets the requirements of either the Swiss Football League or the stadium itself. In future, the ultra-modern ground will also be used more often as an arena for various events in addition to football. Uli Forte’s team and the youth squads will be able to start training on their new pitch for the 2014/2015 season as early as 7 July.

Not only does the switch to synthetic turf mean a significant improvement in training activities as a whole for BSC Young Boys, it also underlines the status of the Stade de Suisse as a football stadium and events venue of national and international importance. This is also highlighted by Alain Kappeler, CEO of BSC Young Boys: “Switching over to synthetic turf allows us to improve the general conditions considerably and helps us more than ever to pursue our two main aims: sporting success with YB and a profitable overall business.”

As well as the “strongest” synthetic turf fibre in the world (450 micron), LigaTurf RS Pro CoolPlus also scores highly with its elastic sub-base and in-situ construction. The new football turf system and the turf filaments with CoolPlus function also have the capacity to cool the pitch on hot days and lessen the impact of frost in winter. This new technology, which requires no external energy supply, is awaiting a patent.

“The synthetic turf is the right decision for BSC Young Boys and the Stade de Suisse,” said sports director Fredy Bickel. “It gives us far better training facilities for the first team, the U21s and the U18s. We also get the latest generation of synthetic turf with all the improvements that have been made since 2011, and are collaborating with a proven manufacturer of synthetic turf from Germany.”

Not only does the new synthetic turf system improve quality, it is also a more cost-effective solution. Lower spending on maintenance means that considerable savings can be made on operating costs in the Bernese football stadium. Shorter setup and disassembly times mean that more revenue can be generated through additional events in the arena.

After weighing up all the key factors involved, the management and board of directors of BSC Young Boys and the Stade de Suisse took the decision to install a synthetic surface again following two and a half seasons on natural grass. International acceptance of synthetic turf in football stadiums has increased greatly over the last three years. Its appearance and technical qualities in terms of suitability for sport are on a par with those of real grass, whilst its resilience is in fact superior. The second-biggest stadium in Switzerland is thus ideally equipped for the challenges of the future – whether as the setting for a second Miracle of Berne or concerts by international artists.

Having served its time, the grass pitch will be removed in the next few weeks. The Polytan LigaTurf RS Pro CoolPlus synthetic pitch is scheduled for completion on 24 June.