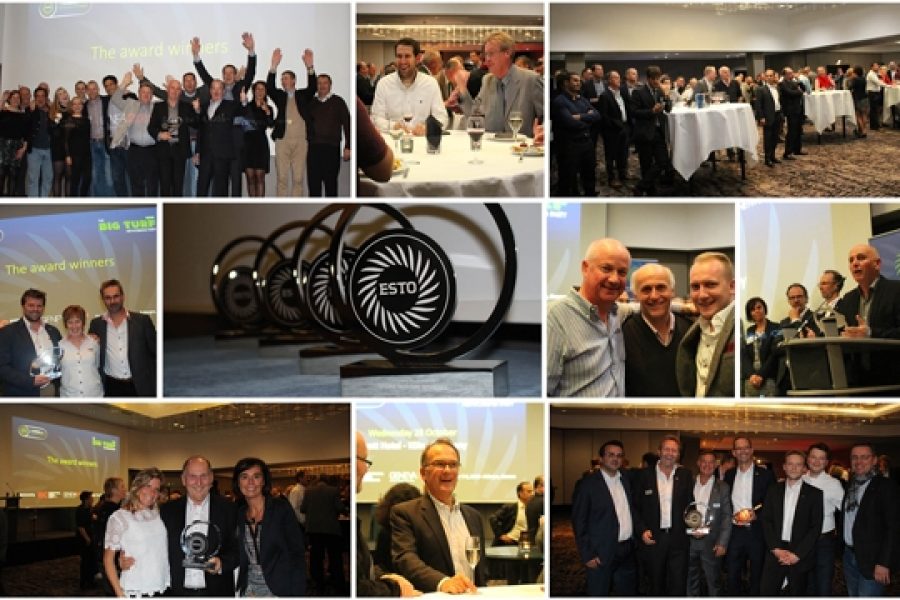 Last week representatives from all sectors of the turf industry came together in Cologne, Germany for the 2015 ESTO Awards and the Big Turf Networking Party.

With over 300 people in attendance at the Hyatt Hotel on Wednesday 28th October, the annual event provided an opportunity for ESTO members to share innovative ideas and best practice, and celebrate the many successful projects throughout the synthetic turf industry over the last 12 months.

As part of the evening, three sector leaders were added to the ESTO Awards Hall of Fame; Stefan Diderich of Bonar Yarns, Frans Harmeling of Tencate and Alastair Cox of Alastair Cox Associates were inducted in recognition for their services to the industry.

FIH won the Sports Governing Body Lifetime Achievement award and next year will celebrate 40 years since synthetic turf was introduced at the first Olympic Games for Hockey.

Sports awards were awarded to Polytan, Schmitz Foam, Sport Technik Bohemia and the Landscape award was awarded to Hatko.

ESTO Vice President Bryn Lee of Bonar Yarns was also honoured with the Lifetime Achievement award, with a career spanning more than thirty years in the synthetic turf industry.

Commenting on Bryn’s achievements, Nigel Fletcher, ESTO chairman, said, “On behalf of everyone at ESTO, I would like to congratulate Bryn on his well-deserved Lifetime Achievement award. Alongside his tireless work in raising awareness of the benefits of synthetic turf, Bryn has been a highly active contributor to the trade associations over the years, and continues to lead on synthetic turf matters through his role as ESTO Vice President.

“This year’s awards and Big Turf Networking Party have been very well-received, with success stories celebrated and ideas shared that will undoubtedly help move the industry forward.”