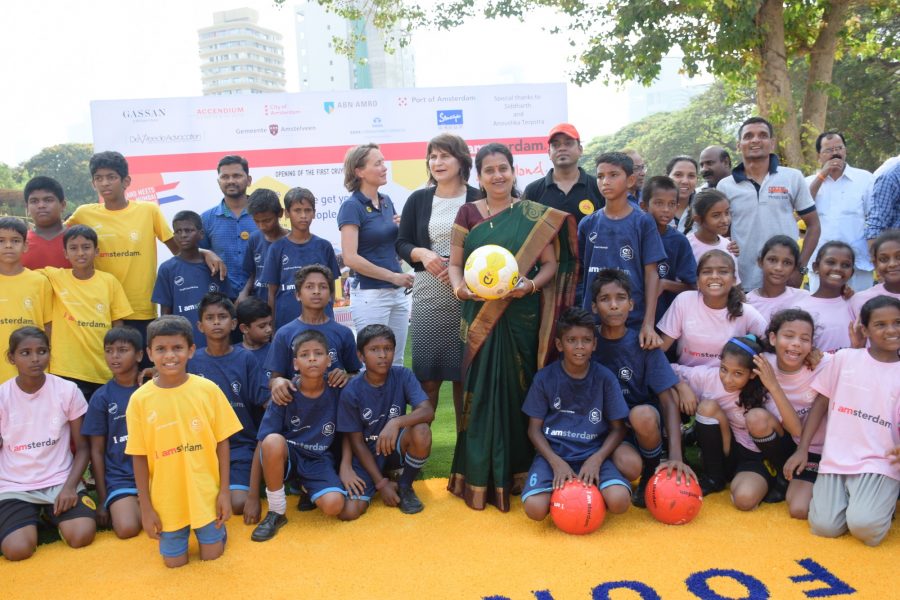 The Cruyff Court in India is a result of the economic collaboration between the Mayors of the City of Amsterdam and the Municipal Corporation of Greater Mumbai. The Cruyff Court in Mumbai fulfills the desire to give back the community, the corporate social responsibility aspect of this economic collaboration. And will give the children of Parel a safe place to play in the centre of the community.

The Indian NGO, Magic Bus, steers over 275.000 children towards a better life with better awareness, better life skills, and better opportunities, in the journey from childhood to livelihood by using sport and games. They will also organize activities on the Cruyff Court. But also the Mumbai Distric of Football Association (MDFA) is closely involved with the Cruyff Court, especially because football is becoming increasingly popular in India.

Niels Meijer, director of the Johan Cruyff Foundation: ”We are very proud of the fact that we realized the first Cruyff Court in India in collaboration with the city of Amsterdam and municipal of Mumbai. We create a platform where children and youngsters in Mumbai have an opportunity to play sports and games, play together. We use football as a means to help them in their personal growth. Through the collaboration with our partners such as TenCate/Greenfields, who is our supplier for the artificial turf, and AkzoNobel, who donated their products so that we were able to give the surroundings a facelift, we were able to realize this Cruyff Court.”

Mr. Kandharkar, president of the MDFA, said, “This facility once up and running will be a major boost for the area and will inspire the next generation of young people to take up sport. We would like to thank the Cruyff Foundation for all their support in helping to make this possible.”