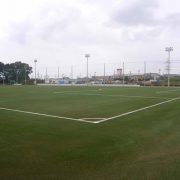 Italgreen installs the first stone in Japan, thanks to Geofill®, the patented natural infill, well appreciated by Japanese players, lovers of environmental friendly products made in Italy.

In partnership with the companies Rise Corporation and Mizuno Ltd we have successfully completed the project installation, whereby local federation has specifically has chosen the system 62 Lesmo HD Geofill, excellent product able to perform the optimum for the game: the best compromise between performance and durability of the artificial turf system.

As proof of the product high quality, the system has successfully passed the performance tests carried out on the surface by the JFA, and has been registered as top product in the Japanes FA sport floor list.

Once again Italgreen shows to be one of the European manufacturer leaders, well known worldwide as innovative company, offering the market specialties aimed to attract the interest of professionals and amateurs. 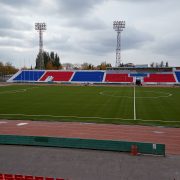 Italgreen confirms once again market leader in terms of innovation and quality and strengthen the presence in Kazakhstan market, resurfacing Pavlodar stadium, previously installed by a dutch company.

Geofill® is the original natural infill, covered by an international patent and well recognized by the most important international federations, the worldwide optimum, able to satisfy the most demanding performance needs of professionals, in full respect of the environmental standards imposed by federations and municipalities.

Geofill® has the extra oomph if compared to pure cork, too light to provide the artificial turf system the correct stability : Geofill® is available in several versions, customized according to the different weather conditions where turf system will be installed.

Italgreen is market leader in Kazakhstan, contributing to the infrastructural development of the professional club Kayrat FC: under construction the installation of the 4th artificial turf field at Maylina sport center, 62 Lesmo Leonardo GN.

(CALHOUN, Georgia) – Shaw Sports Turf and Italgreen S.p.a. of Italy, have announced an exclusive partnership for Geofill in North America.

Geofill will now be offered exclusively in North America to customers of Shaw Sports Turf.

“This partnership allows us to continue to differentiate Shaw Sports Turf as the leader in the synthetic turf marketplace,” said Phil Barlow, Vice President of Shaw’s Turf and Specialty Markets Division. “Geofill is an environmentally friendly infill system that further reinforces the positive performance attributes of natural grass in a synthetic turf field system.”

Introduced in 2005, Geofill is the first 100% natural infill in the world. It was originally introduced to provide a high-performance, environmentally friendly infill system. More than 500 fields around the world currently feature Geofill.

Geofill is a 100% organic mix, consisting mainly of coconut fibers and organic materials resistant to aging, tearing, and adverse weather conditions. Geofill creates a stabilized layer between the synthetic grass fibers which fills in the system like natural grass. An added benefit is that Geofill systems are typically cooler than systems which use rubber infill.

Geofill systems meet all FIFA requirements for one and two-star certification. FIFA is the world governing body of soccer.

“Shaw is a name known throughout the world for being a leader in manufacturing,” said Maurizio Gilardi, Director General of Italgreen. “Italgreen and Geofill are also names with a best-in-class reputation, so this is a partnership which will greatly benefit customers in the North American market.” 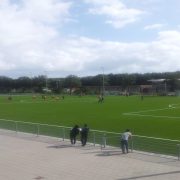 During the summer, Italgreen have installed three full size ‘Evolution Recyclable systems’ (football fields) at the RKavic football club in Amsterdam. The first being installed in August by their local partner J de Ridder BV.

This innovative system consists of a ‘Polyethylene XQ pile fiber’, whereby the back of the Evolution system is coated with polyethylene. This makes the product more homogeneous, and offers wider applications for recycling at the end of its lifetime.

Secondly, the resilience of the ‘spring back technology’ pile fibres, allows them to recover to their original position, which contributes to a better consistency, and safer playing surface. Players, clubs, football associations and federations look for these characteristics. This is a real innovative product for the artificial 3g market
place, replacing playing surfaces where ‘pile flattening’ is the norm! All Evolution fields will meet FIFA certification.

Rkavic FC are very happy with their new fields, and according to the clubs spokesman Mr. Ton Van Meerwijk ” This pitch is 200% better than our previous one, the colour alone gives it a fresh and perfect look – always looks as if it’s just been mowed!”.

Italgreen who are based in Northern Italy, supply (besides the Evolution system) the patented Geofill system – Natural infill. Also being a FIFA licensee since
1983, continue to develop innovative sports playing systems / fields. Now with more than a 1000 installations worldwide, we are a key player in the industry, and strive towards delivering perfection and innovative products for tomorrow’s market place.