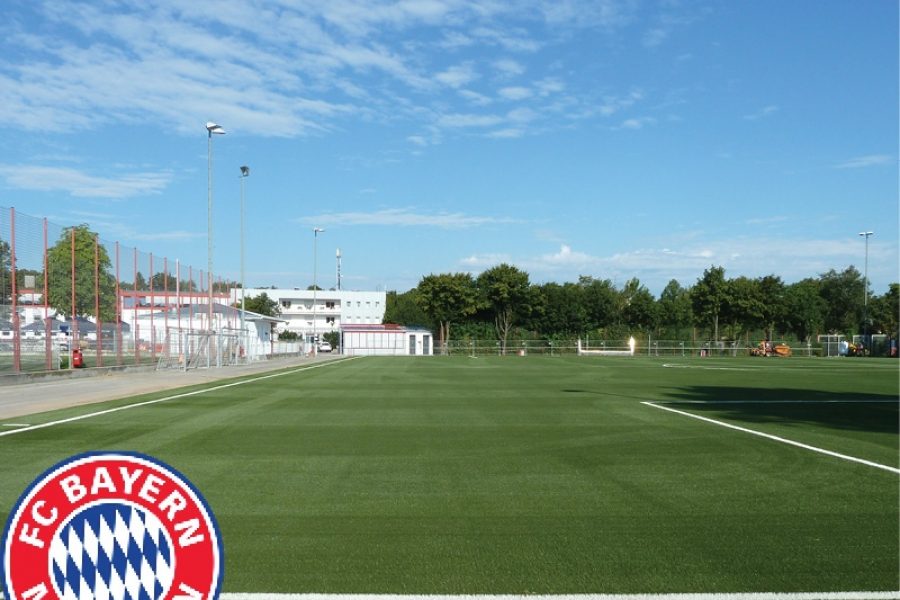 The 80,000 square metre training ground of Säbener Strasse is located in Munich and is FC Bayern Munich’s training centre. This site offers to Germany’s biggest and most successful football club superb training and playing conditions to the club’s entire series of teams, from the under 8’s to the senior professional squad.

This training centre has five grass pitches with two of them having undersoil heating, but also two synthetic turf pitches, one of which was installed in August 2011 and constitutes a premium turf system. The benefits obtained from owning this synthetic turf in their training ground for Bayern Munich are numerous as it is an asset that is now nearly vital for any big football club that want training facilities matching their very high ambitions in the game. This can be demonstrated by the fact that all prominent German football clubs – Borussia Dortmund, Borussia Monchengladbach, FC Schalke 04 for example – exhibit a synthetic turf pitch at their training centre.

Beyond the fact that their synthetic turf looks and feels natural, thanks to its soft turf fibres derived from a new filament cross-section in conjunction with a new raw material formulation, it offers a wide range of practical solutions to Pep Guardiola’s team and the club’s academy teams for training. Indeed, during winters, when some clubs have to train on frozen or muddy pitches, lacking grass and uniformity, Bayern Munich have the delight to train on perfect conditions guaranteed by the synthetic turf throughout the year. The pitch keeps its natural ball rebound and rolling properties as well as its player/turf interaction softness, and benefits from undersoil heating, keeping the surface quality high in freezing conditions.

This suggests that the German champions can train all year with the same demanding levels of technique and intensity in trainings instead of moving indoors to play. Moreover, this synthetic turf, after smoothly enduring winter, will also be pleasant to play on during the summer as its surface temperature remains consistently low in sunlight thanks to turf and granules technology ensuring coolness.

Two specialist sport surfaces for hockey and football at the University of ...