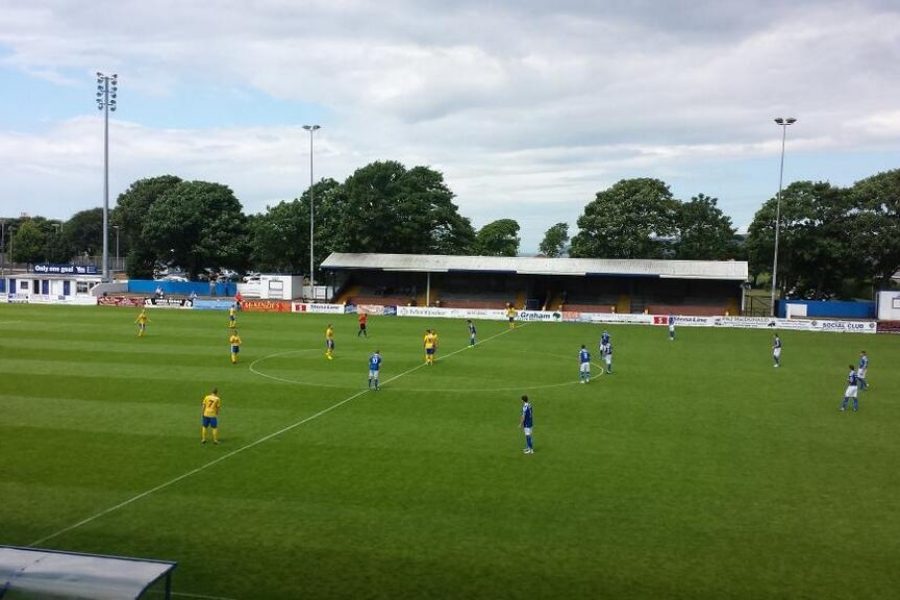 The first Bangor FC was founded, according to local legend, in 1914 in a rowing boat on Bangor Bay. In the following years of war people tried to continue with their life as normally as possible and football has been an important aspect for that. Encouraged by early success, Bangor joined the then Intermediate league where they played until gaining admission into the Irish League in 1927.

Throughout the times of economic depression in the late twenties and thirties, Bangor were able to field a team which was able to keep its head above water, though often to be found in the lower half of the league.

At that time Bangor FC played at the Ballyholme Showgrounds which were sand based and therefore provided one of the best and robust surfaces in the Irish League. In 1934, the club was given notice to quit as the ground was required for building houses and after a season when all games had to be played away from home and which almost saw the demise of the club, Bangor moved in 1935 to their present home at Clandeboye Park which was provided by Bangor Borough Council.

Bangor enjoyed the most successful period in its history during the 1990s when the club qualified for Europe for the first time in its history after finishing second in the Irish League. This success was followed by winning the Irish Cup in 1993 after two replays against bitter rivals, Ards.

On 13 May 2008, it was announced that Bangor had secured a place in the new 12-team JJB Sports Premiership for the 2008/09, season despite only having finished third in the IFA Intermediate League First Division in 2007/08.

Unfortunately, their stay in the Premiership only lasted a season as midway through the campaign the Club decided not to re-apply for the Domestic Licence that was required to compete at this level. As a result, Bangor FC were relegated at the end of the season and in season 2009/10 they competed in the Championship 1 league. The first season back in Intermediate football proved quite difficult with a hastily arranged, young squad.

In his first full season in charge, Frankie Wilson guided the side to its first trophy since 2005 when they won the Steel & Sons Cup.

After much negotiation during 2012 and the early part of 2013, Bangor FC’s application to Sport NI for grant aid was successful. With a matching loan from UCIT (Ulster Community Investment Trust) Bangor were able to proceed with their plan to lay a new synthetic pitch at Clandeboye Park.

Aligned to the laying of the pitch new floodlights have been installed to complement the development of the ground. Work started on 24 June 2013 and the new ground was opened without much fanfare on 12 October 2013 when Bangor beat Knockbreda 2-0 in a Northern Ireland Football League Championship 1 match.

The new FIFA Approved synthetic surface is 99 metres x 63 metres with a run off area of 2.5 metres. The playing surface is surrounded by a steel fence (replacing the old concrete wall) and a 2 metre wide tarmac walkway. The development allows spectators to access all sides of the ground for the first time in many years. While the demand is mainly for soccer, it is also suitable for Rugby and Gaelic training. It is also envisaged that it would be suitable for a wide range of sporting activities including sports days and also non sporting events (e.g. Charity Days, Family Fun Events, Exhibitions, Concerts).