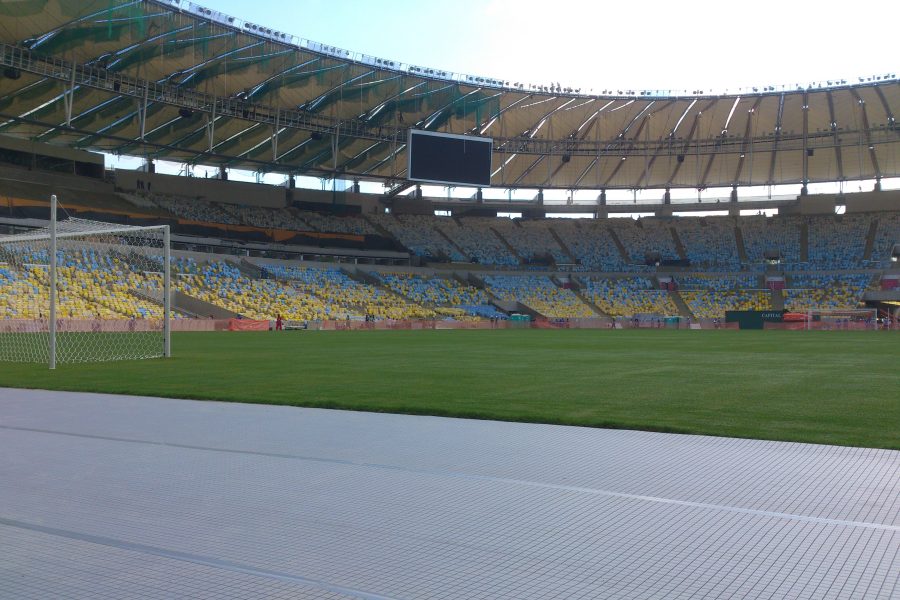 Lucerne, April 2014. The list of sports fields built on Alveosport counts well over 200
and includes some of the biggest names around the world. With the installation
of Alveosport at the Maracanã Stadium in Rio de Janeiro, another famous name
was added to the list.

Alveosport is a patented, high performance, crosslinked closed-cell polyolefin foam
shockpad designed especially for use in artificial turf sports fields. Sekisui
Alveo launched the Alveosport brand back in 2006, and many different artificial
turf systems have been developed since. A range of Alveosport products is
available, in order to perfectly match the other system components and provide
an optimal surface for any chosen type of field sport.

Alveosport meets all relevant international standards and requirements,
including those of FIFA, FIH, IRB, AFL and many other sports
organisations. Some countries or clubs have additional local requirements that
must be met. The Alveosport technical manager is our expert for dealing with
all sorts of norms, regulations, and special requirements – making it easy for
customers to get exactly the playing field they want.

Alveosport is now a recognised and highly respected brand in the
artificial turf industry recommended by many tufters. Sekisui Alveo has become
recognised as a specialist for shockpads for all sorts of artificial turf
systems. Known for Innovation in Foam, Sekisui Alveo is playing a leading role
in this market by continually developing new and improved products and
solutions.

Key challenges of a famous project

In March 2013 the Spanish/Brazilian contractor Royalverd/Greenleaf
needed to install artificial turf around the playing field of the famous
Maracanã Stadium in Rio de Janeiro. The contractor contacted its local
Alveosport representative for advice, seeking artificial turf with the same touch
and feel as natural grass. Two systems were recommended: Behind the goals, a 50
mm monofilament premium turf was installed on Alveosport NUT 4519 10 mm, and on
the sides, attractive landscape turf was used, also laid on NUT 4519 10 mm to
provide additional comfort for players warming up on the side lines.

Royalverd needed the shockpad right away, and Sekisui Alveo delivered. Thus the
installation was completed and the field inaugurated in April 2013. Maracanã
Stadium was built in 1950 to hold 200,000 spectators, and it is still one of
the largest stadiums in the world. It hosted the 2013 FIFA Confederations Cup
and will host the 2014 FIFA World Cup and the 2016 Summer Olympics and
Paralympics. Over 7,800 m² of Alveosport was installed at the stadium in
preparation for these major events. The playing field itself is natural grass,
and all the turf surrounding it is artificial – with Alveosport inside.

Using an Alveosport shockpad elevates the performance of an artificial turf pitch and
adapts the pitch to the needed sports requirements. Alveosport ensures high performance
over a long period and reduces the risk of injuries. The material is
prefabricated in rolls and is easy to install.