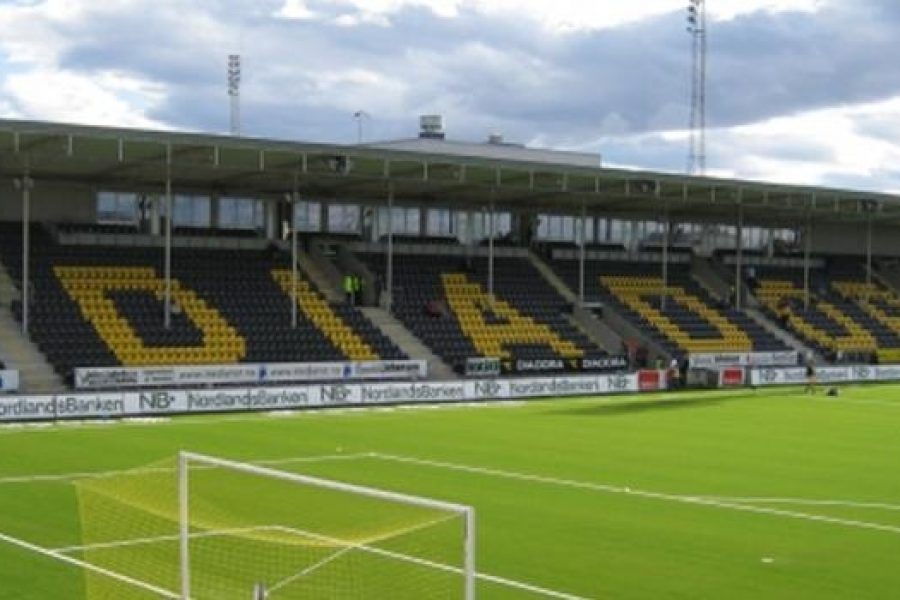 Aspmyra Stadion is a football stadium in Bodø, Norway. It is the home ground to two Norwegian professional football clubs: FK Bodø/Glimt playing in Tippeligaen (men’s first division) and IK Grand Bodø in Toppserien (women’s first division). The stadium can hold up to 7,354 spectators. Among main features, its football pitch is made out of synthetic turf grass since May 2006, making it one of the four Tippeligaen stadiums equipped with this surface.

It is no surprise that Norwegian football has developed such use of synthetic turf as winters can be very harsh on natural grass, often causing high maintenance expenses and match postponements due to damaged pitches. Decision-makers at the Aspmyra Stadion have therefore followed the path of using synthetic turf back in 2006. At that time and after extensive research and testing, a re-bounce® shock pad was installed along with the synthetic turf, having proved highly performing. Indeed, this level of performance is demonstrated through a predictable bounce of the ball throughout the entire year, excellent shock absorption, injury reduction and increased player comfort and performance.

Increased life expectancy is also a main feature of this synthetic turf. Its shock pad contributes to a large extent to that durability. Before getting selected, this particular shock pad underwent testing along with many other shock pads by a group consisting of football players testing different synthetic turf systems in Europe, all with different shock pads.

The result was that during 8 years of intensive use by the Norwegian first league football team FK Bodø/Glimt the pitch obtained the highest certification year after year. Moreover, it was decided during the 2014 summer to replace the synthetic turf system at the Aspmyra Stadium with a new one, again with the proven re-bounce® shock pad. Since the previous shock pad was still in excellent shape, demonstrating its formidable resistance and durability, it was able to be reinstalled for another synthetic turf pitch in Saltstraumen, still in Norway, starting a second life at a different location.

Two specialist sport surfaces for hockey and football at the University of ...
Scroll to top