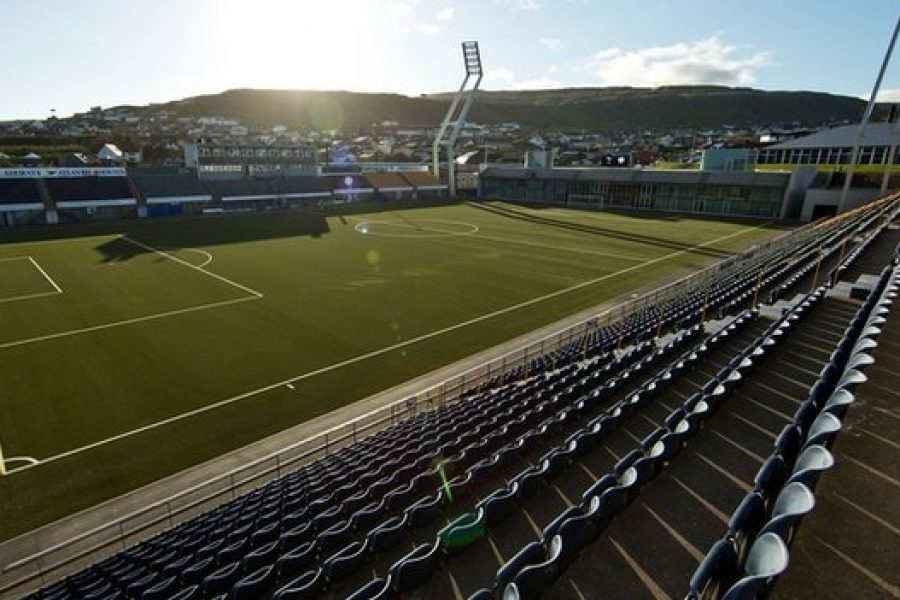 The Faroe Islands are becoming increasingly solid and competitive in international football, having earned honourable results in World Cup or Euro qualifiers in the past years. Their recent win in Greece back in November in the Euro 2016 qualifiers is there to remind that they are not a team to be underestimated anymore. In the course of their football development, eventually bringing improvements on international scale, the Faroe Islands built a new stadium in 1999 to host their matches: the Tórsvøllur national stadium in Tórshavn.  It has had since then a couple of major revamps for new stands and floodlight additions, it can host up to 6040 spectators all seated.

Since 2012, Tórsvøllur has had a synthetic  turf pitch which is more suitable for the weather in the Faroe Islands. FIFA-president, Sepp Blatter visited the Faroe Islands in 2012 and he appeared full of praise regarding the pitch. “Such pitches are a key asset for the development of football and this is even more true in regions of the world where the weather conditions can be challenging at times. Football is for all”, said Mr. Blatter.

The synthetic turf pitch has hosted many big nations of football, including Germany for example in the 2014 World Cup qualifiers. Joachim Löw’s side stepped onto the LigaTurf RS Pro CoolPlus pitch to win 3-0 and had no problems at all playing on synthetic turf. Germany’s striker Thomas Müller commented: “It was good, because it allowed us to let the ball run really well.” And midfielder Julian Draxler also confirmed that it “suited” the team “to play on this surface”.

FIFA has awarded its FIFA 2 Star Recommended rating to the national stadium. This indeed rewards the high performance status of the pitch, notably characterized by high level of wear resistance and excellent playing qualities such as perfect ball circulation on the ground, as the German team showed with a quick and intense passing game to earn them victory.

Total to present its “Yarn Chemistry” at AMI and SFIP Conferences in February...
Scroll to top