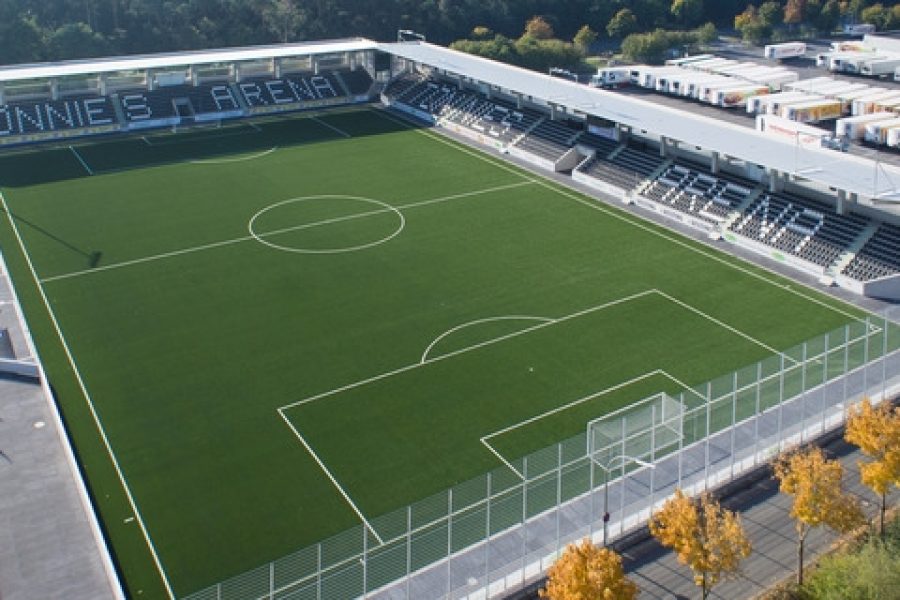 The Tönnies Arena is a football stadium located in Rheda-Wiedenbrück, Germany. This ground of a capacity of 3,562 spectators was inaugurated in September 2012 with a synthetic turf pitch. It was opened in the presence of Franz Beckenbauer with a game -the Ruhr derby- between FC Schalke 04 and Borussia Dortmund.

It is actually located on the premises of the food industry company Tönnies which is headquartered in Rheda-Wiedenbrück and gives its name to the ground. The stadium hosts the games of women’s football club FSV Gütersloh 2009, playing in women’s second division and sponsored by Tönnies, but also those of operating teams of the company and the youth teams of the FSC Rheda.

As to its synthetic turf, it is the first one used in top tier women’s football in Germany. It needed a special authorization by the DFB (German Football Federation) which was granted. This required all the respective opponents in German women’s football to agree to the venue, which they did.

Technically speaking, the synthetic turf pitch which has FIFA 2-Star certification, is completed with pitch infill made from SBR rubber granules coated with a layer of polyurethane coloured in green, which gives the pitch a more natural appearance, and helps to reduce odours when the weather is hot.  Mostly, the surface consists of monofilament fibres of a thickness and shape so as to offer the best durability as well as softness, to reduce skin abrasion of players. This pitch is looking to be a useful tool to help develop women’s football even more in Germany by offering entertaining matches, thanks to its quality and consistency, which may inspire more people to follow and get involved.

Total to present its “Yarn Chemistry” at AMI and SFIP Conferences in February...
Scroll to top