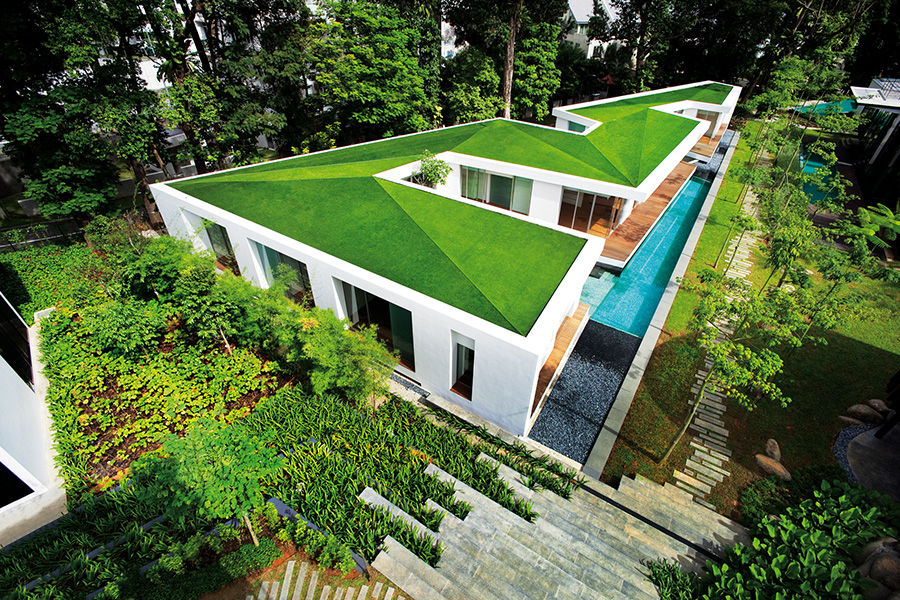 The weather conditions Europe has been experiencing this year provide a perfect business case for property owners to invest in synthetic turf for their gardens or public spaces. Apart from making the garden less dependent on good weather to remain lush and green, studies show that synthetic turf will also increase the value of their property and the well-being of its occupants.

Weather conditions this year are extreme but certainly not unexpected. Climatologists have been predicting such conditions for years, and they continue to warn that more is to come. According to their forecast the average temperature will go up by almost two degrees in the next 50 years. They also predict long, hot, dry periods to occur more often in Europe. This puts many municipalities, farmers and property owners in a predicament. The long and dry period experienced between May and July this year was aggravated by a lack of rain, leaving authorities all over Europe with no other option than to prohibit the excessive use of water for irrigation. As a direct result, many grass fields, parks and gardens have turned brown or have completely faded. They have become an eyesore that will require considerable time and resources to be rehabilitated. The knock-on effects should not be underestimated. The contributions a green and lush environment can make on people’s general well-being or their perception of improved security is well-documented. A Dutch study has even highlighted that the value of real estate would jump by 10% when the garden was lush and green. Given the fact that most gardens and public spaces around the globe use natural grass and vegetation, those studying colour psychology agree that it is the colour that matters and not the material of which items have been made. Belgian and Dutch landscapers have now jumped on the bandwagon by offering a painting service that will make gardens look green and lush, a service well-received by real-estate agents eager to sell properties.

Grass the first to suffer

Virtually every garden has a significant section covered with grass, making it the most obvious sufferer from severe heat or water restrictions. Due to the limited root zone, grass struggles to find adequate water supplies deeper below the surface. Scientists of Wageningen University (WUR) in the Netherlands, reported mid-July that the summer weather conditions had resulted in grass all over the country being 17% less lush than usual. In some parts the number jumped to 37% less lush than usual. Unless action could be taken immediately, the scientists feared that grass, particularly in those areas in the Netherlands where the soil predominantly consisted of loose sand, would become a steppe. The subsequent unknown and uncomfortable picture this would create could affect public perception significantly.

Synthetic turf is not affected by weather conditions. It doesn’t require water to maintain its colour or condition and the carpet has been specifically designed to drain rain quickly, no matter how severe the down-pour is. The carpet prevents heat from affecting the soil directly underneath, thereby slowing down the dehydration process of the surface and its immediate surroundings. The engineered design of a synthetic turf surface for gardens also provides a much safer surface. In the absence of any reliance on water, the soil underneath the carpet always remains loose instead of turning into a solid, compact surface with characteristics comparable to concrete.

The believe that synthetic turf surfaces are warmer than a natural grass surface, is a persistent urban legend that is ill-considered. Most gardens include trees, or have trees in the immediate vicinity. It is likely that the foliage of the tree prevents solar radiation from heating up the synthetic turf surface in the first place. Producers of landscaping products also have a tendency to use very thin and shaped fibres, thereby reducing and distorting the surface that could possibly absorb or reflect the heat. Even if it would be established that all this fails, special additives could be added to the master batch from which yarn is produced. An increase heat reflecting characteristics of the fibers will reduce the heat absorbing capacity of the fibers and, as such, any possible heat build-up over the synthetic turf area by as much as 10%.

The adverse weather conditions of 2018 have certainly had an impact on natural grass sports fields, public places and domestic gardens. If the predictions made by climatologists are anything to go by, the future certainly looks bleak. An article recently published in the scientific magazine Nature hinted that the high temperatures measured during the summer of 2018, could reoccur in the coming four years. The authors predict that the oceans have started releasing the heat they absorbed during a break in global warming that occurred between 2000 and 2014. In less than twelve months we will know if their prediction has any merit.

The hot and dry summer of 2018 might have offered many people perfect conditions for a short but well-deserved break. An investment in synthetic turf for gardens and public spaces might now be worth considering as this will ensure reduced stress levels throughout the year. In the end, using synthetic turf in gardens, parks and public spaces, will guarantee that things will always look greener.